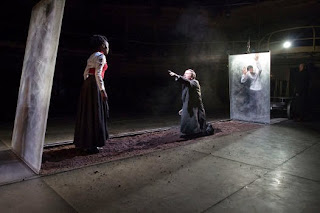 
Leo Tolstoy's Anna Karenina comes alive on stage at the West Yorkshire Playhouse in Leeds. The theatre's joint production with The Royal Exchange Theatre, adapted by Jo Clifford and directed by Ellen McDougall, is staged in the round.

Anna Karenina's biggest wish is to be happy but like many women she has to live, though comfortably, in a predominately masculine society and adhere to what is expected of her. She fights for her desires and independence throughout and follows her heart by falling in love with Vronsky.

Powerful and convincing portrayals of Anna and Vronsky are given both by Ony Uhiara and Robert Gilbert respectively.  They perform collectively the passionate love shown between both the characters and convincingly project the emotional roller coaster expected from the story.

John Cummings plays Levin extremely well; he demonstrates to the audience how he's finds difficulty in establishing a presence and finding love in a rich and poor divided society in 19th Century Russia. Tolstoy wrote this novel bearing in mind the social inequalities raised which suggests the eventual country's revolution in 1917.  Clifford wants to focus on the story's three main characters and look at the social context then and how this affects many today in similar situations.

Joanna Scotcher's in the round staging is simple with a railway track running through; the railway is the centre point for re-enacting the plays scenes with versatile stage and its related props.  An excellent production performed by an exceptional cast and supported by a talented creative team.  Anna Karenina is playing until 13th June 2015 at the West Yorkshire Playhouse.