Under Milk Wood at Liverpool Playhouse by Annie (@Corieltauviart)


I have fond memories of seeing Under Milk Wood (click on to the link for the review) earlier this year at York Theatre Royal and when it embarked on a Wales and England tour.  It is nice to rekindle memories of this fascinating production by Clwyd Theatre Cymru.  Annie (@corieltauviart) also caught the same production at Liverpool Playhouse and she has kindly agreed to share her thoughts in the review below: 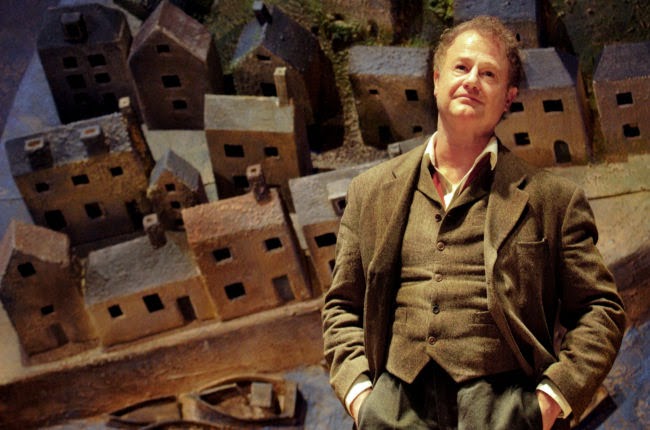 A simple yet eye catching backdrop greets the audience upon entering the auditorium, and the performance that follows leaves the distinct impression of a kaleidoscope of voices recanting the story of a single day in the lives of a group of individuals living in the imaginary - or perhaps not so imaginary - village of Llareggub.

Plumbing the depths of human memories, fantasies and realities and the inexplicable manner in which all three meet and merge in the thoughts of the characters, this seminal work of fiction(believed to be based in the reality which Thomas observed around him) really does speak with the voices of the subconscious and this production makes the work, originally broadcast as a radio play, seem relevant now.

This simply staged production by Clwyd Theatr Cymru, has a minimal set, with actors taking turns centre stage both individually and in groups, to tell the story in a mix of both vocal and physical characterisation; at times physical expression becomes so powerful,as in real life, that it tells its own story, yet still feeling faithful to its earliest roots as a radio broadcast.

Christian Patterson and Owen Teale provided a strong and compelling narrative as First and Second Voice. Nine other actors share the voices of the remaining village characters,bringing each to life in turn; every actor moving fluidly from portraying one character to another, convincing in each different persona,not only vocally but physically, with a corresponding change in body language. I was enthralled by the way in which each actor jumped between characterisations so smoothly and seemingly effortlessly, while not breaking the flow of the narrative.

The story of one day in Llareggub unfolds, bringing with it the memories, fantasies and realities of each character: Mog Edwards and Myfanwy Price writing about a fantasy of shared love through letters, remaining forever unfulfilled; Mrs Dai Bread One and Mrs Dai Bread Two living in a surreal jealous threesome with Dai Bread, seething with mutual jealousy and yet dependant on each other. The poignant sadness of Polly Carter and her lost loves; Mr and Mrs Pugh: a husband driven to unspoken murderous hatred by a wife incessantly nagging; Mrs Ogmore-Pritchard haunted by two deceased downtrodden husbands and Captain Tom living only in his memories.

I was truly impressed by the talent of the ensemble, the actors ability to switch between roles and yet still bring every character to life. Every emotion based in human thoughts was expressed and in turn experienced by the audience: sometimes bawdy, sometimes poignant , often causing huge eruptions of laughter and enjoyment caused by its earthy humour, this company proves that this work is still relevant and can still be enjoyed by an audience 60 years after being written. See it and enjoy!

Thank you Annie for doing the above review.  The Wales and England tour has now finished but it is hoped that the wonderful poetic play will tour again in the not too distant future.  Check out Under Milk Wood official website for further information and news.
Posted by Dawn Smallwood at 08:34