Les Enfants Terribles Ernest and the Pale Moon is currently at the Edinburgh Fringe Festival.  This production did a UK tour prior to the festival and Annie (@corieltauviart) saw it at Pwllehl's Neuadd Dwyfor in June. Here is her review:

Ernest and the Pale Moon 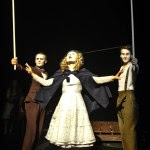 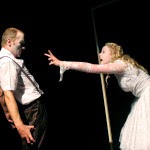 Seemingly a gothic pastiche of a silent movie, Ernest and the Pale Moon opened with a single chair and it's inhabitant. A stark, simple yet strangely eerie set; moody and exaggerated lighting and a grimly stirring soundscape of accordion, cello, glockenspiel and song, this is a story of an obsessive voyeur watching a woman in her window from the safety of his window and also watching with the inner workings of his soul ; and the strange, troubled characters and history which surround the pair.

A short, hour-long, effective piece of drama, I believe this production is more suited to fringe theatre than the mainstream,the play is strongly reminiscent of the era of silent horror movies: exaggerated facial expressions emphasised by white-painted faces, movement and action often  replacing words to create the effect of physical theatre, each of the four actors swapping between characters,and becoming narrative voice, musician and even part of the set and backdrop in some scenes. The dramatic soundscape and lighting accomplished much of the storytelling alone.

Set, characters and story flow seamlessly through remembered events: the memories and experiences of the characters before and during the story woven together into a tapestry which moves back and forth through time until the ultimately surprising ending.

Evocative of Hitchcock movies, Edgar Allen  Poe's writings and the Hammer Horror films, this is an entertaining and disturbing, highly stylised, almost kitsch production which is curiously enjoyable.

May I take the opportunity to say thanks to Annie for doing this review.  This exciting production is currently on at The Pleasance in Edinburgh.  The production is running until 25th August 2014 and ticket can be booked via its website.
Posted by Dawn Smallwood at 07:24