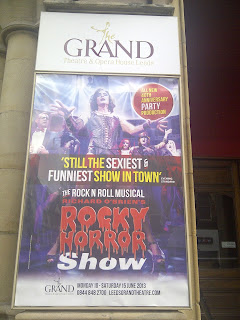 
I thought of this phrase from one of the Rocky Horror's musical numbers.  The phrase captured the spirit of the show with characters truly being themselves without any restriction.  Surprisingly, I never considered seeing the show seeing, to me at the time, it was a cross over of science fiction/rock and roll which aren't really my things.  However the show was coming to Leeds as part of a 40th Birthday celebration since it's creation in 1973!  I have a number of friends and acquaintances who are big fans of Rocky Horror.  I can now understand from sharing the same vein, seeing the same show again and again, with Phantom.  I was intrigued so I booked myself a ticket for the 5.00pm Friday matinee that week.

I arrive at the theatre inappropriately dressed! Lol!  Many people were dressed up in fancy dress and dressed up as the characters from the show.  To some consolation I wore black trousers and a red top so I was able to get into the spirit of things.  I notice the number of signs of what isn't allowed in the audience as well as the usual prohibitions.  I surprised to see toast listed! I enquired why this wasn't allowed along with other unfamilar things and it all made sense that this was all part of the show!

Soon as the show began I immediately got into the spirit of things.  I was participating in the infamous Time Warp which we all got up for and witnessed full audience participation throughout especially with the musical numbers.  The first Act went so fast and before I realised it was the interval!  Act two continued in a similar fashion with further participation.  During Rose Tint my World/Don't Dream It, Be It I was thinking the song reflects the characters' urges to be themselves including Brad (Sam Attwater) and Janet (Dani Harmer).  Nothing was going to be in their way in order to pursue this!

The show offered an eclectic combination of science fiction, rock and roll, sexuality, liberation, fun and with some tradition and innocence thrown in.  These themes aren't strange to us today and each one of us have eclectic tastes which makes us unique as individuals.  In my theatre programme, Shaughan Seymour (original Rocky Horror Cast member) accounted that Rocky Horror was 'years ahead of its time' with the fact that many are much more 'open with their sexuality and 'rock 'n' roll and science fiction are just as popular'

A party atmosphere from beginning to end! Christopher Luscombe, the show's director, said that 'Rocky is a party, it's fun.' and  'Rocky is like a holiday from life' (quoted in my theatre programme)  I can vouch this and so can the many many Rocky Horror fans! I believe the show has something for everyone whether it's to party and/or to think deeply about the issues that rise from the show.  This is probably why the show is celebrating 40 years since it's creation!