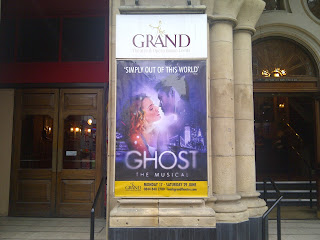 Ghost The Musical at Leeds!

Initially I had no desire to see The Ghost The Musical until I learnt the musical was coming to the Leeds Grand Theatre during June 2013.  I decided then to give the musical a chance despite my reservations of Blockbuster movies being adapted on stage.  I enjoyed Sister Act and Dirty Dancing on stage last year so I subconsciously had a feeling I would enjoy Ghost too.  I felt reassured in a way because of the good reviews the tour were receiving.

Well the musical exceeded my expectations. I was very impressed with the visuals and lighting used to give the state of the art staging it's maximum effect and the nature of the story told.  A big thanks to the company's talented creative team!  One criticism I had was the loudness during the show even if I appreciate this would have made the connective effects.

Dave Stewart and Glen Ballard wrote the music and collaborated with Bruce Joel Rubin in writing the lyrics.  There are some memorable lyrics the musical such as At the beginning, Here Right Now, the infamous Unchained Melody, the poignant I can't breathe, and the lively Are You A Believer.  Act One concluded with the moving Suspend My Disbelief/ Had a Life and musical numbers continued into Act Two such as the helpful Focus, the show stopping I'm Outta Here, and the reprise of Unchained Melody and the final moving The love inside.

I was entertained and moved with the show from the beginning until the end.  Wendy Mae Brown as Oda Mae Brown stood out for me the most and was my favourite performer in the show.  She fully embraced the role of the psychic with humour, professionalism and ultimately love.  I also enjoyed seeing Stewart Clark (Sam Wheat) and Rebecca Trehearn (Molly Jenson) perform the principal roles.  They certainly went on a romantic journey through the communication of the present world to the next one.

Ghost is touring around the UK this year and at beginning of 2014.  Further information can be found on this website.