Seeing Once once isn't enough!

After a lovely day spent with my dearest friends, Alex and Annie, in London at the end of May I was back down this time for a couple of days (15th-16th June 2013).  It felt very strange returning to London and not seeing Phantom! I wasn't regretful with my decision and was glad to have taken the opportunity to see a different West End produciton.

I caught my train at a very ungodly hour on the Saturday morning.  I was very concerned about missing my train so I chose not to sleep the night before.  So I went down to London on a total lack of sleep and with only half an hour or so kip on the train journey! At the last minute I chose to see Once and because of my early arrival into the capital I went for a day ticket.  I've heard very good reviews about the musical and some of my theatre going friends and acquaintances have enjoyed seeing it. 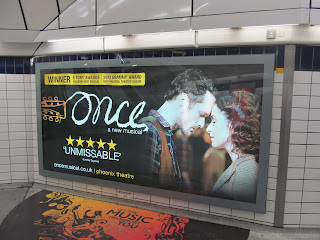 The advantage of an early arrival gave me an opportunity to be guaranteed a day ticket and I got a front row stalls seat! I then met up with Annie for drinks and lunch and afterwards I made my way to the Phoenix Theatre for the matinee performance of Once.  Once is refreshingly different to the many musicals I've seen on my theatre journey. The musical is based on the movie written and directed by John Carney and Enda Walsh is the playwright for the work on the musical. The Broadway production won numerous awards since its opening. 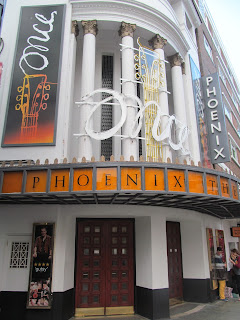 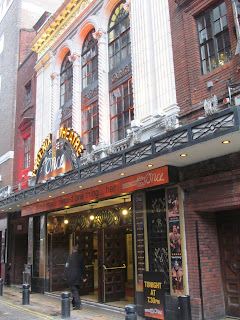 There was only one stage scene, inside of a bar, used throughout the show. The audience is invited to go up on the stage and purchase drinks from the 'bar' before the show and during the interval.  The drinks are rather expensive but you're given a souvenir beaker for which your drink is put in. Some of the cast members came on stage to warm up playing some music before the show actually started. To me the interaction with stage and audience is unique.

From the beginning I was transfixed with Once with it's incredible journey and the heart rendering relationship between  the Guy (Declan Bennett) and the Girl (Zrinka Cvitešić) through their love of music.  Their musical talents were complimented through the support of their families and from the Irish and Czech communities in Dublin.  It was interesting to see Valda Aviks (Baruska) who was my first ever Carlotta in Phantom! 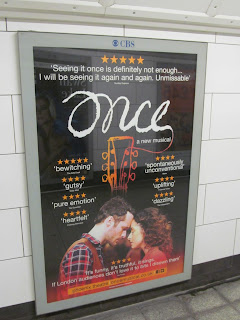 The talented creative team have put together a wonderful production.  The story is projected beautifully with its incredible music.  The principals of the show are supported by a great cast of talented musicians and singers.  There were some moving musical numbers including the Tony Award winning's Falling Slowly and other amazing songs such as If You Want Me and When Your Mind's Made Up. My overall thought of Once is something you don't see just once! I highly recommend the musical and I plan to see it again very soon! For further information about this amazing musical, please check the official website

After Once I caught the underground to the Royal Albert Hall for the evening performance of English National Ballet/Derek Deane's Swan Lake in the Round....which will be in my next post so please keep tuned.