A Doll's House by Henrik Ibsen

Another play in another city! I recently went to see A Doll's House at Manchester's Royal Exchange Theatre.  Ashamedly, I never heard of Henrik Ibsen and his literature until my friend suggested that we travel across the Pennines and see the play. 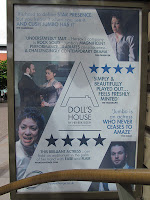 I felt the play had a rather slow start with this two way happy family dialogue between Nora (Cush Jumbo) and Torvald (David Sturzaker).  Half way though Act 1 when Nora's secret of the past was revealed, courtesy of Krogstad (Jack Talton), which had begun haunting her.  The plot thickened and my intrigue grew stronger as to what was going to happen.  During the interval, I was ready to learn to what would have become of Nora when the secret is out and how this would have affected her future including her family, society and most importantly herself.


Not long into Act 2 her past secret where Nora's independent decision making was applied was disclosed.  Torvald made patronising references about how she should behave in a social and legal capacity.  Legally, at the time, women weren't allowed to make independent decisions and had to leave the decision making with their husbands.  Socially, Nora was expected to be submissive to her husband and wasn't encouraged to fulfill her potential and talents.  As the theme of the book goes, she was a doll living in a doll's house.  Torvald's  supposedly complimentary pet names, such as bird, were childlike. Nora had to do what was expected by her husband in a masculine and unequal society whether it was willingly or unwillingly.   I didn't think Torvald deliberately made her feel this way and he was just as much of a victim of the patriarchal society and system.

Analysing this from a Western and Modern Day perspective, Nora yearned to be her unique self.  On her husband's discovery of the secret, she had begun questioning the society she lived in.  The disclosure have suggested an awakening call to her self discovery and the necessity to be liberated from the prescribed life she had.  This meant making sacrifices in order to explore her full potential through empowerment. She courageously found her voice and was able to express articulately to Torvald how she felt and embarked on the journey to find her true identity and individuality.

Messages and themes explored from play reminded me of how women were portrayed during the Victorian and Edwardian times at the end of 19th Century/beginning of the 20th Century.  A domestic revolution took place, parallel to Ibsen's Nora, such as the Suffragettes Movement which had begun just before World War I and how this revolutionised women's roles on secular, political and social spectrums.  Coincidentally, at the same time I saw this play, I read Fiona MacDonald's article, At the feminism frontier in the Metro Newspaper and how certain women, such as Emily Davison, courageously fought for women liberation.  Her quest ended tragically but she began the long journey of campaign for women's rights and liberation.

Today, women are accessing more and more opportunities including a voice and the right to vote.  However there are still some noticeable exclusions in a number of countries and many campaigns and political uprisings are working very hard to fight their belief of what is right. Many are risking their reputation, livelihoods and imprisonment.

Ibsen wrote a very moving story and the book offers opportunities for further adaptations and directions including his wonderful production. Bryony Lavery did a an amazing adaptation which was perfectly directed by Greg Hersov.  Both Lavery and Hersov ensured that the messages raised from the story were given to the audience who could relate them in their everyday journeys.  Cush Jumbo's exceptional performance as Nora made it worth attending this unmissable play.  My next aim is to read the book.
Posted by Dawn Smallwood at 11:39