Season of Plenty at Shakespeare's Globe! 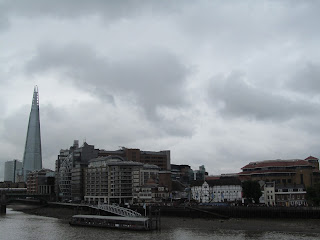 For a very long time, my dream was always to see a Shakespeare play at The Globe.  I was able to fulfill this dream one Friday afternoon to somewhat a mixed (weather wise) June day.  It was exciting to see a play at the very same site of one of London's very first playhouses in replica (since 1997) of what the first Globe Theatre would have looked like.

I chose to see Macbeth from the company's Season of Plenty summer's repertoire.  I studied Macbeth at GCSE level and thought it would be great to appreciate this tragedy.  Soon as I booked my ticket for the performance I learnt Joseph Milson was going to stare as Macbeth.  I saw Joseph as Raoul in Love Never Dies a few times during the Phantom's sequel run during 2010 and 2011.  So I was very happy to have learnt this! 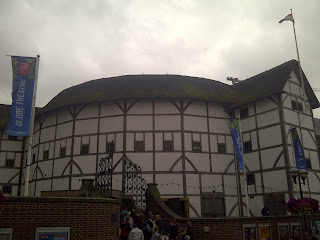 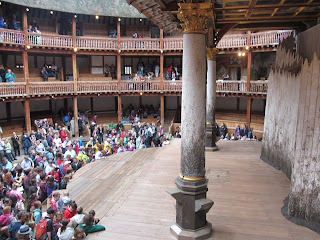 My view from the Gentlemen's Room inside

I sat in the Gentlemen's Room, situated at the side of the stage, and I was very happy with my seat: plenty of leg room, comfortable chair, and most importantly I was undercover! I didn't even need to hire a cushion which is needed for most of the wooden seats/slips in the auditorium.  There were many standing in the Yard which created a typical Shakespearean feel.  I envisaged a similar atmosphere happening in the days of Marlowe, Johnson and of course Shakespeare.

This production consolidated my awareness of the important and contextual themes which were raised.  These included women's empowerment, superstition and witchcraft, jealously, power and greed with its destructive effects, psychological and emotional issues and the political struggles between Scotland and England at the time.

Joseph Milson was an exceptional Macbeth and fully embraced the spirit of the character as to what I imagined.  I also enjoyed Samantha Spiro as Lady Macbeth; Billy Boyd as Banquo; Gawn Grainger as Duncan alongside the very talented cast and creative team.  What made it special was the traditional costumes the actors wore the use of music to set the moods for scenes - The beating of the drums at the Beginning of the drama to a Highland fling to celebrate The End and forming the Encore.

The weather was mixed for the performance.  Those in the Yard had to keep pulling up their coats' hoods or donning their macs on when the heavens opened! Umbrellas weren't allowed! Still it didn't dampen the wonderful afternoon at Bankside.

I would like to see another production at the Globe one summer in the future.  I'm happy I was able to fulfill another dream!
Posted by Dawn Smallwood at 14:18