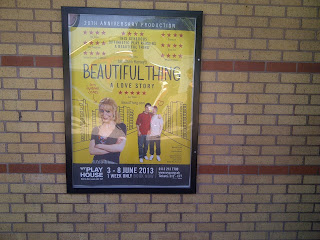 I saw this coveted play recently at the West Yorkshire Playhouse.  I say coveted because it was hard to obtain a ticket.  In fact I had to take an afternoon off work to see the play as the other times I wanted to go were sold out!

Jonathan Harvey's Beautiful Thing was celebrating 20 years of its existence with its first premiere in 1993.  Celebrations were planned for a limited run at the Arts Theatre in London followed by a mini UK Tour in Liverpool, Leeds and Brighton.

The play takes us through a journey about the society we live in today where there are no definitives.  There were a lot of realistic themes raised from the play such as falling in love for the first time, modern family relationships, and sociology such as the working class.  Significantly, it addressed sexuality and how the two boys, Jamie and Ste (Jake Davies and Danny-Boy Hatchard) fell in love and the audience is reminded about this issue that is faced by many in everyday modern society today its effects it has on people involved in their lives.  Also for those who face a similar situation as the boys have the hope and fulfillment that there is there is accepting love out there (and also experience the connection and relief that their partner feels the same way too) which will strengthen once the relationship is established.

Nikolai Foster focuses on the beauty of the characters in Beautiful Thing from falling in love to succeeding one selves despite society's attitude and the prescribed systems that society have put in place.  Personally this play made me aware what many face in society especially sexuality and it even explored my existing conceptions and how these can be adjusted to accommodate and consolidate my roles and responsibilities in a diverse society.  Sadly ignorance prevails and there is a lot yet to be done but what needs to be done to educate and raise further awareness.  On a positive note, compared to 1993, rights for gay, lesbian and transgender people have come a very long way.  There are further developments currently taking place, albeit debate, for those people to be given further rights which many have and in order for them to be more embedded in society.

I thoroughly enjoyed the play.  I love the simple urban setting of a landing walkway of the three flats.  The acting has been impressive by the talented cast including Surranne Jones (Sandra); Jake Davies (Jamie); Zaraah Abrahams (Leah) and Danny-Boy Hatchard (Ste) who kept the spirit of the raised themes and that falling in love and having aspirations are beautiful themes.   Thanks to the amazing creative team including Jonathan Harvey, Nikolai Foster, Colin Richmond, George Dennis and many others.

It's a shame the tour has now finished but there is a digital download of Beautiful Thing available on the website. 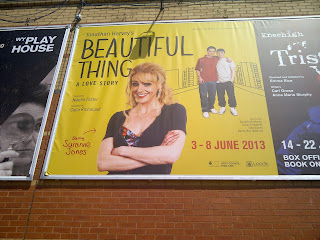 Post note: Just want to say a big thanks to my friend, James, who shared his thoughts of this amazing play!