Kay Adshead's The Bogus Woman is touring at intimate venues across the UK.  The one person production starring Coronation Street's Krissi Bohn explores the harsh and cruel reality of asylum seekers in this country.  The asylum seekers escape a horrific journey from their country of origin only for this nightmare to continue with the country's bureaucratic and inflexible system which keeps changing with its ever changing politics! 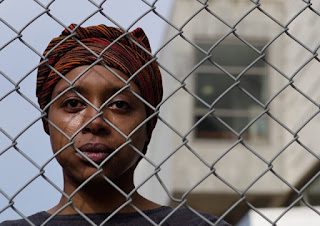 The play shares with the audience the appalling treatment of asylum seekers at detention centres,  their missing records including vital evidence for cases and appeals, and the everlasting formal processes and policies which are strictly followed.  This upsetting, harrowing and powerful dialogue gives one a realistic picture of what many go through when seeking asylum.  One feels during the performance that there is a glimmer of hope where the situation could lead to a indefinite leave to remain in their adopted country.  Sadly realities as explored in this dialogue for many is not the case and the horrific life journey continues on after their deportation to their country of origin.

A stellar and convincing performance by Bohn who interprets brilliantly the asylum seeker and the people involved in her disturbing life journey.  A great direction to this powerful dramaturg is done by Zoe Waterman.

The situation concerning asylum seekers and refugees is even more relevant today.  As reported in the news and media; more and more people are seeking refuge from war torn and political instable countries and this is on the increase.  Sadly ignorance prevails however hope is that many organisations are doing their utmost to make the refugees welcome in their cities and give them the support they will need.

The Bogus Woman is touring across the UK  and the schedule can be found via its website.
Posted by Dawn Smallwood at 17:43