I always have the pleasure taking my lovely niece to the theatre. When the opportunity arose to see Shrek The Musical in Bradford I did not hesitate to book for both of us. 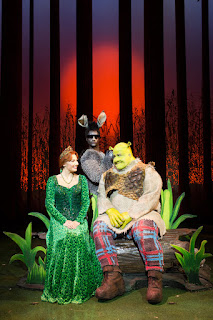 I saw the UK tour production (my review here) when it premièred at Leeds Grand Theatre in July 2014.  I remember being the first in the queue when booking opened on one Friday morning in September 2013.  My efforts were awarded with a free goody bag including the film DVDs. 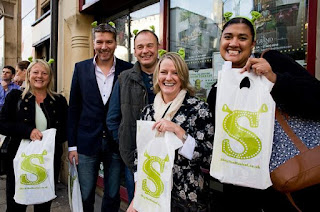 In the queue for Shrek tickets when they went on sale at Leeds Grand (2013)
Photo Credit: Leeds Grand Theatre


My niece's thoughts of Shrek:

"The musical was absolutely amazing! Dean Chisnall was an amazing Shrek and Bronte Barbe was an amazing Princess Fiona! I particularly like Donkey (Idriss Kargbo)! He was very funny, an amazing dancer, a brilliant singer, and the outfit was adorable.  He was an amazing actor too!  Gerard Carey did really well as Lord Farqaad.  It must have been really painful being on his knees for the amount of time! I would love to go and see it again, it was really fun to watch! All the songs were amazing and the costumes were really unbelievable! My highlight, was when the Donkey and Dragon met.  It turns out she is a really good singer!" 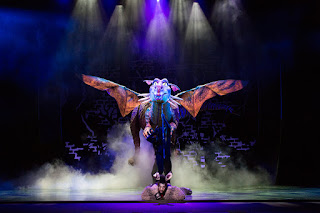 
It was an excellent performance led by Dean Chisnall, Bronte Barbe and Idriss Kargbo.  I did notice some slight changes in the costumes but I consider this important as it keeps the production fresh.  There are comical and modern references (particularly from musicals and films) which do draw audiences in of all ages.  Shrek is a kaleidoscope of fairy tales rolled into one story about an ogre.  One can learn overall that ogres and key characters should not be judged by appearances.  Shrek will continue touring until 2016 and details can be found on the website.