York Stage Musicals, directed by Nik Briggs, is presenting their brand new production of Legally Blonde The Musical at York's Grand Opera House.  Based on the Amanda Brown's novel and subsequent film, Legally Blonde became a popular and award winning musical both on Broadway and in the London's West End. 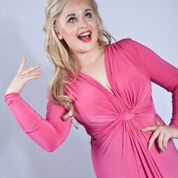 Elle Woods (Maya Tether) is a girl who has it all but only to be dumped by her boyfriend, Warner (Matthew Ainsworth), for being "more Marilyn Monroe than Jacqui Kennedy".  This leads to for her to follow Warner to Harvard Law School with the hope in being reunited with him.  The musical follows her Harvard journey which she shares with Bruiser, her faithful chihuahua, Paulette (Jo Theaker) and Emmett (Timothy Gough).  She sums up her experience by proving to everyone that "being true to yourself never goes out of style" even in the most testing of circumstances.

Legally Blonde has it all with an excellent lead performance by Maya Thether, played Tracy in the YSM's production of Hairspray, in March this year.  She is supported by a thoroughly committed and talented cast who put all their awe and effort in making this an excellent production with Lesley Hill's choreography.  Cool and imaginative sets highlights Elle's favourite colour and great musical catchy numbers written by Laurence O'Keefe and Neil Benjamin under the direction of Stephen Hackshaw.

A feel good musical to contribute towards a feel good night.  This production is on until Saturday 12th September 2015.
Posted by Dawn Smallwood at 14:03