The award winning dance company, Northern Ballet, premièred for the first time, Watkins's 1984.  The world première took place at the West Yorkshire Playhouse in Leeds and was received well by the audience and critics alike. 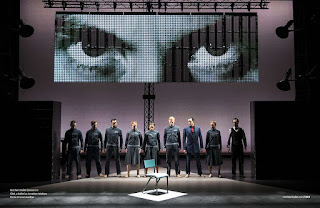 
Based on George Orwell's novel, 1984 could not be any different today than in 1948 when the book was written.  Big Brother reigns supreme as Winston Smith is watched 24/7 and any thought of freedom and rebellion is suppressed and subject to punishments and cruelty unimaginable!  This is seen parallel to lot of the political dictatorships in many countries today and even countries with supposedly more liberty is monitored indirectly by government through technology and records in order to combat the threat of terrorism and other atrocities.  1984 was written just after the Second World War and during a time of an ever changing political climate in Europe.

Simon Daw's set is thrown with Chris Davey's lighting and Andrzej Golding's video design focuses how its citizens are watched and scrutinised.  The clever use of television screens certainly control people's actions and even thoughts unbeknown to them.  This is all combined with dramatic choreography by Watkins and incredible and synchronised dancing performed by Isaac Lee-Baker (Winston Smith), Dreda Blow (Julia) and Ashley Dixon (O'Brien) with Alex Baranowski's musical composition.

This two hour production certainly provokes thinking and opportunistic reflection on how we live in society today with ever increasing scrutiny.  1984 is currently touring around the UK and dates can be found by clicking on the website.
Posted by Dawn Smallwood at 17:07