The Royal Ballet's Onegin by Annie


Annie went to see The Royal Ballet's Onegin in February and she had kindly offered to review the ballet. 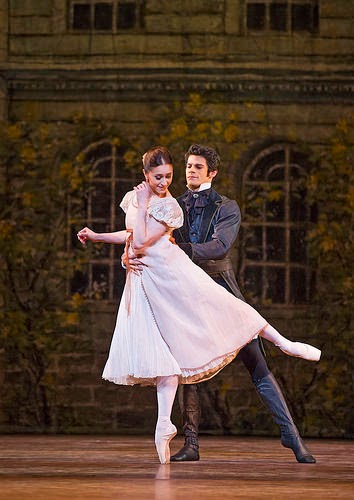 This ballet is an adaptation of Pushkin's eponymous novel-in-verse, Eugene Onegin, a tragic tale of selfishness, self-destruction, betrayal and unrequited love, set against a backdrop of Tsarist Russia and its social conventions.

John Cranko originally choreographed this work for Stuttgart Ballet in 1969, using a score created by Kurt-Heinz Stolze using a selection of music taken from various of Tchaikovsky's works.

Eugene Onegin is a bored, arrogant dandy from St.Petersburg, who has recently inherited a country estate from a deceased Uncle.He befriends an idealistic young poet, Lensky, and is introduced to Lensky's fiancée Olga Larina, and her family. Olga is a flirtatious and fun loving young woman, contrasting sharply with her sister Tatiana who is a bookish, quiet girl full of dreams and romantic notions.

Tatiana is attracted to the sophisticated and urbane Onegin, and even dreams of him, in the first throes of awakening teenage passion, and she sends him a letter in an open declaration of her love.

Tatiana's birthday celebration arrives and the rather shallow Onegin shows his contempt and boredom with the local, provincial gentry. In a quiet moment, he tells Tatiana he can never love her, ripping up her letter in front of her eyes. Annoyed by her heartbroken attitude, he proceeds to flirt with her sister Olga, inciting the rage of his friend Lensky, who subsequently challenges him to a duel.

Tatiana and Olga attempt to dissuade Lensky from his course of action but he cannot shake off his romantic ideals and sense of betrayal. Onegin kills Lensky in the duel and is overcome with despair.

Years later, Onegin returns to St.Petersburg, disaffected with life, and at a society ball, encounters Prince Gremin and his wife, a beautiful, sophisticated and assured Princess.Onegin recognises in the elegant woman the girl he once rejected, Tatiana. Onegin is overwhelmed with passion and desire, writing of his love to Tatiana. On receiving the letter, Tatiana is conflicted between her love for Onegin and her duty to her elderly husband. Onegin visits her in her boudoir and tries to convince her to make a new life with him. Despite Tatiana's confession to Onegin that she still loves him, she chooses duty and marital vows, and ripping up Onegin's letter in front of him, she orders him to leave.

John Cranko's choreography is reminiscent  in many ways of that of Kenneth MacMillan, full of lyricism and emotion, with plenty of opportunities for the principals to characterise and really act the roles.The dancing is full of swathes of adagio movement, elegant and beautiful, it may be lacking the dramatic leaps and overemphasised hyper extension of other ballets, but the graceful elegance of movement is perfectly suited to the setting and story.

In Act III, the ensemble choreography was melodic and pleasing, contrasting strongly with the more earthy Peasant dances of Act I and the "Country Squire" provincial dancing in Act II. The ensemble choreography may not be full of dazzling moments yet the flowing expressive dances do create the atmosphere of pre-revolution Russia in its various social spheres.

The character of Eugene Onegin has been shaped by the constraints of Society and his own shallow pursuits as a dandy, frequenting parties have developed his manner into a bored, cold, emotionless sophisticate lacking empathy, always yearning for the unattainable.

Nehemiah Kish danced the role of Onegin with precision and a pureness of line, combined with assurance and elegance. In Act III, Kish effectively portrays the disaffected man who becomes desperate in his love for the now unattainable Tatiana and his despair and passion is well portrayed.

As Tatiana, First Soloist Itziar Mendizabal gave a dreamy portrayal, a quiet portrayal of the intelligent, romantic and initially emotionally open Tatiana. Where Mendizabal really shone was in her transformation into the married Tatiana, older, polished,sophisticated, shaped by experience and society, bound by duty but tortured by her earlier love, yet strong and intelligent enough to ultimately reject Onegin. I felt Mendizabal danced with grace and precision of movement and developed the character well, partnering effectively with both Kish and Johannes Stephanek (Prince Gremin).

Olga was characterised perfectly by Beatriz Stix-Brunell, with a flirtatious lightness and gracefulness which was a joy to watch, light footed, with beautiful lines, a heartless flirt well acted! Nicol Edmonds danced Lensky with competence, his yearning Act II pre-dual Solo was the highlight of his performance, full of betrayed romanticism and wistfulness.

The development of Tatiana's character is fascinating, through romantic and impulsive teenager with wild and uncontrolled feelings, full of dreamy abandonment, transformed into a woman with a cold, unromantic and sophisticated exterior, her love and emotions hidden within. Onegin takes the opposite journey, from cold sophisticate to desperate lover, but within, his selfishness still thrives: externally they may seem different but deep down they are still the same people.

At the beginning of the ballet, Onegin holds the balance of power but by the end it is the strong and intelligent Tatiana who holds the strength to command, the pivotal moment in the ballet being the death of Lensky.

This is an excellent staging by the Royal Ballet, fine costuming and set design and a production made interesting by the almost restrained sense of tragedy.Some memorable  moments include the Mirror/dream sequence of Act I, Lensky's melancholic solo in Act II , the aristocratic ensemble dancing in Act III and the final Pas de Deux between Onegin and Tatiana.

This is a ballet for those who enjoy choreography in the MacMillan style, and those who enjoy dance-drama with plenty of scope for dancers who have strong storytelling capabilities: actor-dancers who take the roles and bring them to life.

Onegin is being performed on a number of dates by the Royal Ballet at the Royal Opera House, London during February 2015.

by Annie ( @CorieltauviArt )
Posted by Dawn Smallwood at 12:04