Edward Scissorhands in Salford and Liverpool by Annie 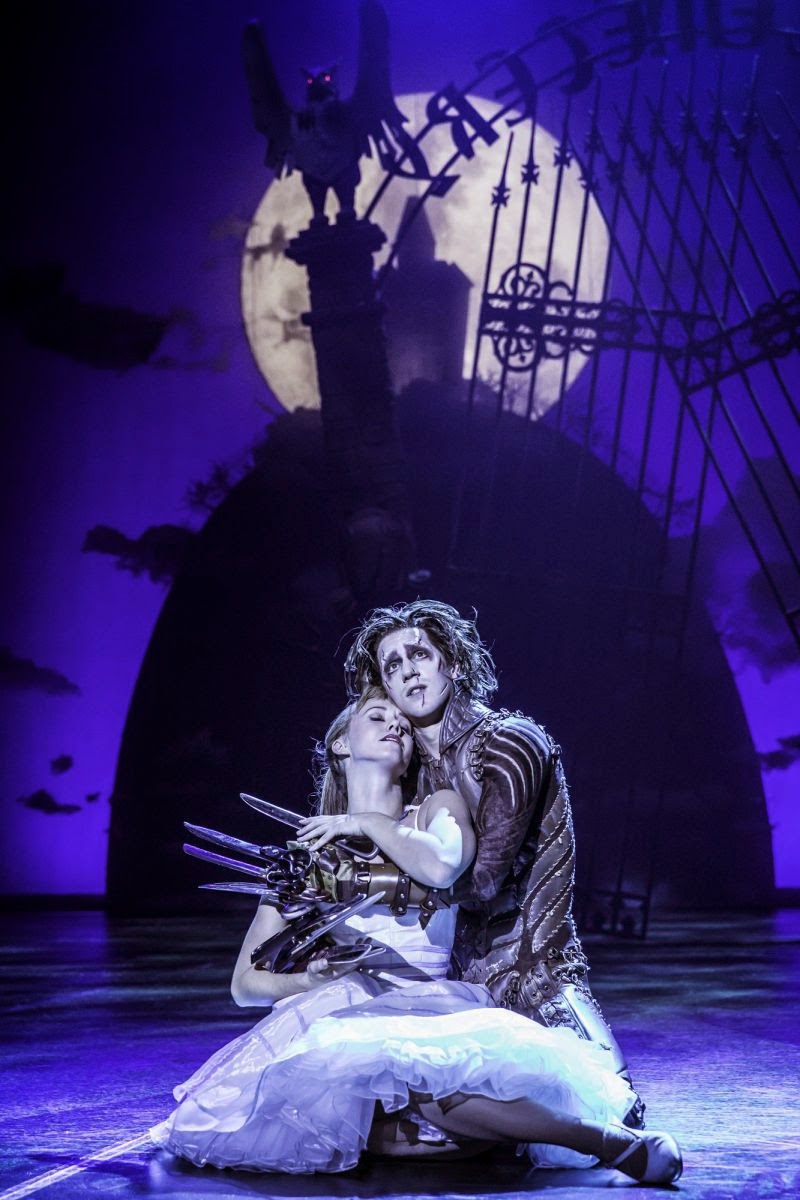 This dance-drama is loosely based on director Tim Burton's 1990 film of the same name, using the film plot as a springboard for Matthew Bourne's own, slightly differing version of the story, while still retaining the heartrending spirit and romance of the original.


The music, by Terry Davies, is based around the original score by Danny Elfman and also conjures the charismatic essence of its predecessor.The sets and costumes, by Bourne's usual designer Lez Brotherston, are a clever mix between Gothic mystery,magic and a cartooned pastiche of 1950's suburban America.


The story is another reworking of the classic tale of the Beauty and the Beast; a struggle for acceptance into society. Edward Scissorhands is vaguely reminiscent of Frankenstein's monster, but infinitely more innocent and tender, evoking empathy rather than fear from the audience, if not all of the other inhabitants of the stage.


Adopted by the motherly Peg Boggs, Edward attempts to mimic humanity, his automaton-like, stuttering movements gradually growing in gracefulness; he tries to copy those he encounters and is desperate for acceptance - something that many in the audience can relate to, and therein lies the secret of Bourne's success: the ability to touch a chord and rouse empathy and understanding in his audiences.


1950's American suburbia is initially represented as a cosy, somewhat sugarcoated normality but this is revealed to be a superficial pretence, concealing a world full of gossip, jealousy, hypocrisy, oneupmanship and resentment, simmering under a seemingly harmless facade.

This is a tale of tolerance and intolerance; an exploration of misconceptions where Edward's seemingly dark,Gothic and mysterious origins are less of a horror than the attitudes of those dwelling in bright,pastel-hued suburbia.


In both matinees, Dominic North excelled as Edward, a beautifully eloquent dance-actor, perfectly personifying the sweet natured, pure-hearted Edward, highly expressive in both face and movement, combining a sense of comedic timing with plaintive longing and a sense of trusting innocence, as he struggles to overcome his frustration at being trapped within his physical differences, forever denied true acceptance by society.


Etta Murfitt was a motherly Peg Boggs in both performances, full of compassion and warmth yet still an archetypal soap-opera housewife.

At the Liverpool Empire, the role of Joyce was played by Madelaine Brennan,creating a more comedic character, a clever parody of a desperate and frustrated middle-aged housewife attempting to be an urban cougar.Both approaches were equally effective!


Dominic Clark as Jim Upton was a threatening physical presence, a bit of a lout, whereas Tom Clark portrayed a youth desperate to be intimidating, less physically powerful, a teenager trying to prove himself.Very different interpretations which were again equally valid.


The role of Kim was danced capably by both Ashley Shaw and Katy Lowenhoff, Lowenhoff bringing a particular sensitivity to the role, particularly when partnering Dominic North.


The ensemble dances were full of character and in places, a certain cheeky comedy and observation so typical of Bourne's choreography.The Topiary ballet was a particularly surreal and magical moment.


This beautiful piece of dance drama has a yearning poignancy enhanced by the backdrop of superficiality combined with emotive music.It is a commentary on the inability of society to accept things and people that do not conform to the recognised norm,cleverly concealed within an enchanting family fairy-story and paralleling the themes in Bourne's Swan Lake, which also explores the concept of acceptance and self-acceptance set against the background of perceived society norms.


This is an excellent production for all the family to enjoy, catch it while you can during 2015 at Norwich Theatre Royal, Birmingham Hippodrome, Milton Keynes Theatre, Bradford Alhambra, Southampton Mayflower and Cardiff Wales Millennium Centre.