Curiosity and intrigue leads one to see this one man production, produced by Icarus Theatre, at Halifax's Square Chapel at the end of January. 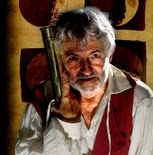 Galileo's trial to heresy in 1533 is narrated by Tim Hardy in a small compact space with neatly arranged laid out props which sets its context.  The trials and tribulations of Galileo were linked to the books he wrote about new astronomical discoveries following construction of his telescope in 1610.  He is an extraordinary individual with a passion for science including physics, mathematics, philosophy and significantly astronomy.

His discoveries of the solar system particularly its relationship with the earth caused controversy among astronomers and eventually to the religious leaders at the time.  The church felt that the discoveries and proof were a threat to one's faith and this led to his trial.

Galileo has been known as the 'father of modern science' and his telescopic contributions no doubt led to the development of astronomy.  This created a nucleus for key discoveries particularly with Isaac Newton, the Enlightenment era and also Albert Einstein and Stephen Hawking in the 20th Century.  The findings and its proof has influenced many to see the earth in a different perspective.

Seeing The Trails of Galileo has opened up ones curiosity to continue discovering whether its science or the arts.  This production is projected with simple but effective lighting and soundscapes which set the characters mood with a wide range of emotions expressed throughout.  It's currently touring in England and Ireland at the moment.  Please click on the schedule.