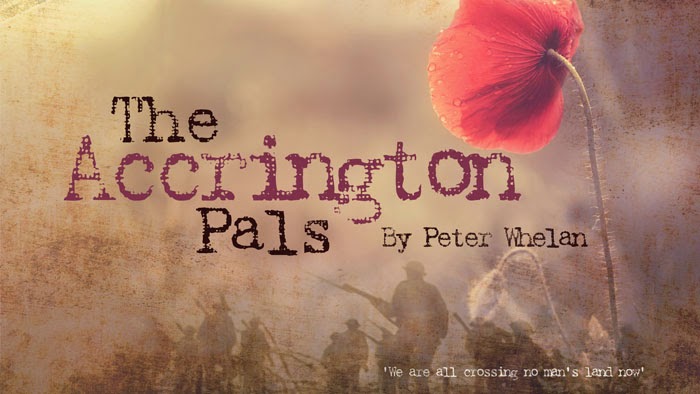 
This amateur production was presented by theatre's in house company, In On The Act, we were treated to an exceptional performance by a talented cast of up and coming performers and its supportive creative team.  The Accrington Pals, written by Peter Whelan, is a play set in a Lancashire mill town during the early days of World War I.  The play invited us into the lives of the village men who were conscripted to the East Lancashire Regiment (known as the Pals), and the women were left behind in the village.

The play raises a lot of thought provoking issues.  The first Act that everyone, it seems, goes along with the typical patriotic Status Quo regarding the war at the time and agrees how good is it to fight collectively against the enemy.  Only May, played by Emma Vincent, stood out and bravely questioned everything around her including the war and the society's attitudes towards it.  During Act 2, the pals in warfare and the women at home had begun questioning the war including their role in it and asking how much it meant for them and for others.  It's evident that their questions and doubts confirmed how disillusioned and ill informed they are with the war and also how their identity, beliefs and expectations were compromised and with some short lived.  These are similar scenarios today around the world past and present.

These questions will never have definitive answers but the play certainly gave an insight how the First World War has had a profound impact on the community such as personal liberties and women's rights. The women in the play led by May (Emma Vincent), Eva (Marie Williamson), Sarah (Shelley Firth), Bertha (Rachel Thompson) and Annie (Lauren Haigh) and fought from the front by Tom (Jamie Brooks), Ralph (Daniel Ingham) and Arthur (Matthew Bennett).  This was all taken in by young Reggie (played by Stephenie Hawkins) whose innocent intertwined by silent observations as a key narrator for the audience.

A well received professional performance by an amateur company.  Peter Whelan, no doubt, would have enjoyed how his story of The Accrington Pals is raising crucial messages today.  The audience left the theatre afterwards wondering and questioning about society then and now!
Posted by Dawn Smallwood at 14:47