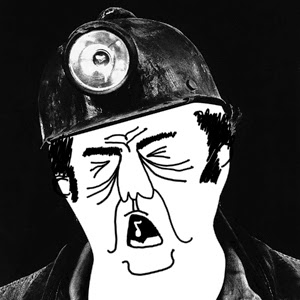 
Close the Coalhouse Door was on at the Oldham Coliseum during June/July 2014.  The Coliseum production, directed by Kevin Shaw, is based on Sid Chaplin's stories, a miner turned journalist.  It premiered in 1968 at Newcastle Playhouse.  It tells the story, from a miner's perspective, of the rise and fall of the coal industry.

The setting was inside a home of an older couple who, Thomas (played by Cliff Burnett) and May (Jane Holman) who were celebrating their wedding anniversary with family and friends.  Thomas, who is a miner, and his mining friends, Geordie (played by Phil Corbitt) and Jackie (played by Andrew Vincent) retold all their mining tales.  It felt like a 'show in a show' with the presenter/expert (played by Matt Connor), at the beginning of the play, introducing and concluding the proceedings, at the very end.  The stories were colourfully relived through comedic acts and Alex Glasgow's songs were sung by the talented cast who doubled up as musicians.  All choreographed superbly by Nicola Bolton.

The miners rode back in time to when coal mining in the North East of England had become big business since the Industrial Revolution in the 18th Century to the 1960s where the industry had an unclear future and when the play was written.  Thomas, Geordie and Jackie, who represented all the miners, joined in their solidarity including the rise of the trade unions who fought on behalf of them for better working including health and safety, fair pay and secure futures.  Sincerity and poignantly featured in the stories of the mining communities with its highs and lows.  The grandsons (played by James Hedley and Samuel Hargreaves) explored their purpose and identity in the community.  They weren't afraid to look beyond the 'box' at a life outside mining, which encouragement from Ruth (played by Maeve O'Sullivan) - which is parallel to Sidney Chaplain's son, Michael, who was the first in his family to go to university and just like Frank in the play.

It's a pity the production only played at the Oldham Coliseum.  It certainly would have been received well by audiences at other venues on tour specially in the North East of England and the anniversary of the 1984 miners strike also.  Anyway, with a well received audience at the Coliseum, the cast and the creative team had put on a heart rendering production tinted with  camaraderie, humour and poignancy with messages which cemented community cohesion, solidarity and determination from the brave journeys the miners rode on.