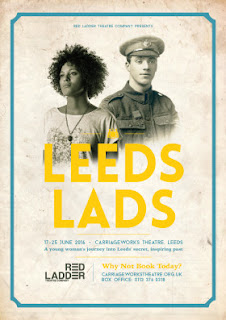 Following success of Promised Land four years ago, a similar format will follow suit with Leeds Lads.  The play is about Tara's journey into the past involving her grandfather and Leeds Pals during World War I in the Battle of the Somme.  The production will coincide with the 100th anniversary of this poignant event and how this had a sacrificial impact on those who fought including the soldiers from Leeds.

There will be a humanities perspective on the subject with the emphasis on Tara's and the sacrifice her grandfather made.  This event and sacrifices certainly shape what the communities of Leeds today.  Dixon shared how the army was more diverse in the First World I than it is today and how the city is far move diverse than it was almost a 100 years ago.

As well as remembering the war and its consequences this plays offers the audience to see the people of Leeds past and present share their life experiences including their hopes and fears.  The casting will include 40 local performers and a debut stage appearance will be made by Jamie Jones-Buchanan, Leeds Rhinos and Great Britain Rugby League player. JJB, he is known as, is especially excited about playing a role as a sergeant and hopes his performances will continue inspiring all in the community.

A great opportunity to attend the press launch.  Now waiting in anticipation for Leeds Lads which opens in June at the Carriageworks Theatre.  Looks like it will be a sell out! Better get booking today!

Auditions are open to all locally and is taking place between 19th to 21st May 2016.