Thrill Me - The Leopold and Loeb Story, Square Chapel of Arts (Halifax) 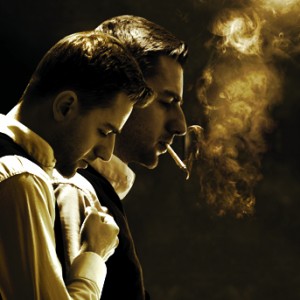 
Stephen Dolginoff's Thrill Me has been touring the UK by storm,  Produced in conjunction with Greenwich Theatre the musical is about two characters, Nathan Leopold and Richard Loeb who cautiously team up which leads to the most consequential events unimaginable,

The musical begins with Leopold recalling the relationship with Loeb at the prison's review board where he has been serving his sentence.  Suddenly the play goes back in time, in the 1920s, from when both men reunite from brief past encounters.

Leopold wants love but Loeb wants revenge with which he takes and manipulates Leopold's loving nature to his darkest and chilling intentions ranging from arson to cold blooded murder.  The musical explores the strong emotions of both characters and testifies how complex human nature and pysche really are with fitting musical numbers.  The story sums up the estranged relationship from unity to ultimate betrayal from both characters.

A dark powerful and manipulative performance where the suspense and thrills twist and keeps one on the edge of their seat.  The audience is encouraged to make up their mind about Leopold and Loeb.  The musical is intensified further with Richard Williamson's obscure lighting; Peter Russell's and Anjali Kale's soundscapes; and choreographed appropriately and intricately by Paul Harris.

Jo Parsons and Ben Woods are excellent players for the two intriguing characters.  Voices by Lee Mead, Patricia Quinn and Les Dennis do not go unnoticed which makes the setting authentic at the beginning, between flashbacks and the ending.  A great thrilling and intensifying evening of musical theatre!
Posted by Dawn Smallwood at 11:33