The Maids - Seven Arts Theatre, Leeds (On behalf of The Public Reviews)

This review was originally written for The Public Reviews and the link can be accessed here. 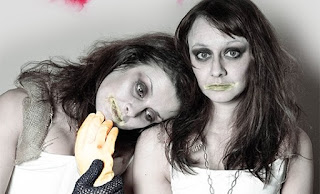 Accessed from The Public Reviews
(http://www.thepublicreviews.com)

Hedgepig Theatre, a local independent theatre company, is renowned for their dark thought provoking productions and takes pride in performing at unique spaces and venues.  Their current production, Jean Genet’s The Maids, is currently touring at venues across Yorkshire.
The audience enters the small dark and dimmed lighting auditorium where they are intimately greeted by two characters, the two sisters, who are at awkward ends with each other.  The tension suggests this will be a dark play with anticipated twists and suspense.
Adapted from Genet’s Les Bonnes, The Maids is based very loosely on Christine and Léa Papin, two sisters who were infamous for murdering their employer in France, in 1933.  In the play two sisters, Solange and Claire, who in turn plot the murder of their mistress through powerful and manipulative role-playing.  Gemma Sharp and Anna Rose James energetically and playfully portray the sisters’ determination to detail of their compulsive and obsessive plotting, leading to distrust and ultimately self-destruction.  The sisters also include their experiences of their love/hate relationship between them and their mistress, played by Victoria Delaney.  The story is accompanied by Kelli Zezulka’s timely lighting and relevant sounds, indicating that the story is deeper in intrigue and curiosity than it appears to the eye.
Curry no doubt stages well a short compact and complex play with unexpected changes of emotional and psychological twists throughout.  As much as Solange and Claire exercises their dominative power towards one another there is this strong mutual love between them, which Sharp and James tenderly and calmly shows.  A provocative production raising various themes, ranging from sociology to psychology, certainly challenges one’s mind with no simple answers guaranteed.  An enjoyable production which keeps you on the edge of your seat from the tense beginning to the abrupt end!