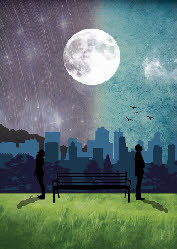 
Lightspeed is a story about two people who had fallen in love but questioning their relationship if not their existences.  Like Sondheim's Merrily We Roll Along, this play starts at the end and work backwards to the very beginning when Charles and Emma first met.

The play opens with unclear reasons why Charles and Emma split up and went their separate ways; however the story reveals, centre at the same meeting place, their questioning and their doubts, albeit differing ones, about their relationship and significantly themselves.

A range of themes are explored from family, mental health to loss and these issues can relate to the puzzle of Emma and Charlie's troubled and unsure existences.  Certainly suggests why it has had such an impact on both their relationship.  Falling in love happens a lot faster, "quicker than the skyline falls to dust" than their pace of self resilience and emotions to react to what is happening between them...hence Lightspeed!

Excellent acting by both Taran Knight (Charlie) and Francesca Heraghty-Smith (Emma) who interpret well their thoughts that are never shared and act spontaneously to things.  This reaffirms the characters' doubts and lack of self-belief with Charlie's frustration about love not being a game and critically raises how long Emma can run for.

Clem Haran's script gives the play potential particularly with relevant themes raised and offers scope for further adaptation should this route be chosen.  There is effective use of technology with uses of flash, lighting and soundscapes and a skyline illustration is used as the space's backdrop.  It is disappointing to have seen a small turn out for this wonderful production and many people certainly have missed out on seeing it!  Full credit to Organised Chaos, a Greater Manchester based theatre company, who are renowned for nurturing talent in acting and creating.