This review was originally written for the The Public Reviews and the review can be accessed here. 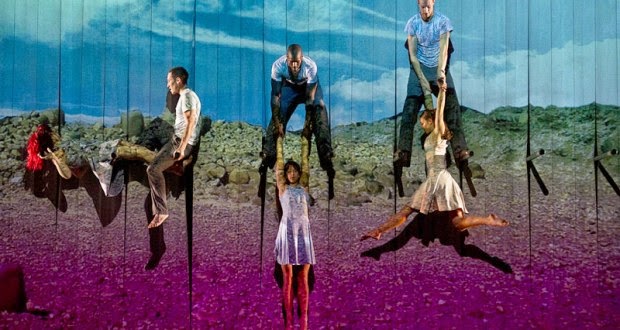 Accessed from The Public Reviews(http://www.thepublicreviews.com)

Kevin Finnan has put together an exciting, energetic and imaginative dance piece.  Motionhouse, established in 1988, is reputed for their innovation particularly its staging combined with theatre and dance.  They are known to choose themes for their productions which provoke thoughts, beliefs and perceptions.
Broken is no exception. This piece explores the relationship between humans and the earth, from scientific and daily perspectives.  Before the performance starts, one senses something is building. Earthly sounds emanate and tense visuals from the stage’s screen lead to the scientific retelling of the Big Bang.
The breathtaking intricate dancing from the six dancers keeps one attentive throughout the piece with their extraordinary strength and agility from their gymnastic and acrobatic feats.  These physical elements synchronises with the on screen digital imagery and visual projections accompanied by the ever changing tempo in the music and soundscapes.   With the aid of poles on the stage, the dancers align themselves perfectly and smoothly to the digital imagery which represents the evolved and created earth movements.  The dancers’ entries on and off stage through the screen’s slits are seamless and it is feels like watching a 3D film.  It is certainly an incredible choreographic feat.
Broken addresses ‘dust to dust’ and ‘dark to light’ metaphorically as well as physically which is interpreted beautifully from the dancers, illustrating aerial sequences relating to the earth above and below.  Emotions emerge from the unsettled, if not broken, relationships between human and nature. There is a contrast of civilisations from ancient ancestors’ caves to modern apartments; however the emotions including fears and hopes do not change from the forces of nature, such as earthquakes and natural disasters.
Broken is certainly a must see production, especially for its creative relationship between dance and digital imagery.  It meets the need for a seismic performance, and addresses the world where the earth’s energy continues to move and shift.
On UK Tour until: 2nd June 2015