Matilda's Imagination and the love of books! 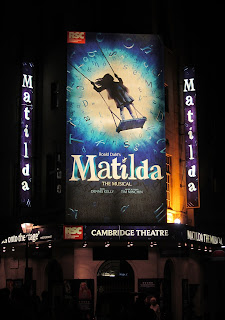 For a while I wanted to see Matilda on stage but not had the opportunity to do so until July 2013.  Of course, I've read the book many times and seen Danny DeVito's Matilda movie.  From this Matilda has become one of my favourite Roald Dahl's stories.

Here I was at the Cambridge Theatre in Covent Gardens waiting with anticipation for Matilda to start.  I was dreading what the seats would be like in the upper circle.  However to my surprise they are probably the most comfortable upper circle seats I ever sat in and would sit in the section again.

I love the staging used throughout the musical that acknowledges Matilda's love for books and her vivid imagination.  The Royal Shakespeare Company and Matthew Warchus produced this musical with Dennis Kelly's writing and Tim Mitchin's songs which he wrote and composed.  I knew Tim Mitchin had an involvement because of the charm and wit in the songs' content which were sung.

The musical was complimented further by Rob Howell's production design; Peter Darling's choreography; Simon Baker's sound creation and Hugh Varistone's lighting and Paul Kieve's enhancement with the use of effects and illusions.  The creative team's attributes consolidate Matilda's childhood including her powerful imagination and her belief to have a better future despite what obstacles she, her peers and Miss Honey are having to face.

The musical's themes were complimented with Mitchin's cleverly written songs such as Miracle, When I Grow Up, I'm Here and The Smell of Rebellion.  I especially loved the setting of Matilda and Mrs Phelps (the Librarian) which were shown as scenes throughout the show.  There Matilda exchanges her thoughts and confides with the Mrs Phelps (Melanie La Barrie) which compliments perfectly the character of Matilda and the context of the story.

The cast were exceptional especially the children who performed as Matilda, Alice, Amanda, Bruce, Eric, Hortensia, Nigel and Tommy.  I enjoyed seeing on stage David Leonard (Miss Truchbull) and Haley Flaherty (Miss Honey) who I saw in Love Never Dies back in 2011.  I had the privilege to meet David and Haley at stage door afterwards.  You can check out the official website for further information including booking tickets. 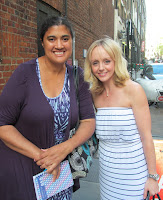 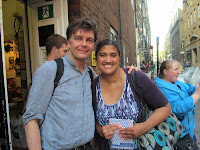 I met Haley Flaherty and David Leonard at Stage Door after the show
Posted by Dawn Smallwood at 12:16