Again I was still deciding what I show I was planning to day ticket for when I woke up.  I had a choice of seeing National Theatre's Amen Corner, The Hot House, The Bodyguard or Merrily We Roll Along. In the end of chose the latter!  Not only was I attracted to the 10 gbp day tickets, I wanted to try and appreciate a Sondheim musical and the show was closing the day after!  I saw Passion back in 1996 and the musical wasn't really my cup of tea, to be honest.  I believe in giving 2nd chances so whilst I queued for day tickets I knew I made the right decision.  I also was reassured by those who I was queuing with! 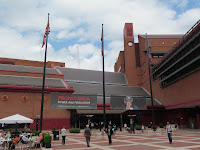 
After getting my ticket for front row for Merrily We Roll Along, I popped into the London Coliseum to book English National Opera's The Magic Flute for later on in the year.  I haven't seen a opera there since Tosca in December 2011! I was very determined to see an opera there before the end of this year.  Next I got the bus to the British Library for the Propaganda: Power and Persuasion exhibition. I've already done a blog on my visit to the exhibition. 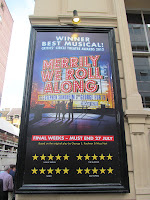 Merrily We Roll Along at Harold Pinter Theatre


Before Merrily We Roll Along I had a lovely Spanish meal at Andalucia on the same street as the Harold Pinter Theatre.  My feelings about the show have confirmed I made the right choice! Please see my blog for more my thoughts. I thoroughly enjoyed the show a lot more that I expected and felt sad it was closing the following day.  I visited the Stage Door afterwards and I managed to get my programme signed by the principal members of the cast.  It was also a pleasure to have finally met Glyn Kerslake, a former Phantom performer and who I saw twice in the iconic role in 1999.  It seems to have been a good trip so far for meeting former Phantom cast members who have been part of my Phantom journey.  It's great to see them now perform in different things.  Had a quick coffee at my favourite independent coffee shop, which opens late, before returning to the hostel.