Being Re-introduced to Sondheim

To be honest I haven't seen that many Stephen Sondheim musicals on stage.  I saw Passion back in 1996 and, personally, it really wasn't my cup of tea.  However I remembered the musical having a strong cast and it was well written with good choreography and direction.  This is probably why I deterred seeing the musicals until I decided spontaneously one day to queue for day tickets to see Merrily We Roll Along at the West End's Harold Pinter Theatre.  I decided to see it with an open mind and give Sondheim the chance he deserves from being a successful composer and lyricist. 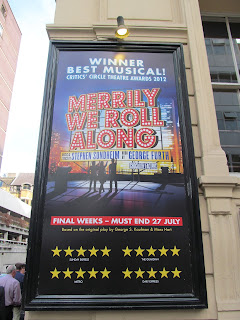 Merrily We Roll Along is based on the play by George S Kaufman and Moss Hart and written by George Firth.  It was originally produced on Broadway in early 1980s by Harold Prince, who is well known for directing The Phantom of the Opera, and company.  Unfortunately, the musical closed very early after 16 performances.  However it wasn't all lost as revised versions were staged including Paul Kerryson production in 1993 and the musical had grown in confidence when it was in receipt of more positive reviews.  This was specially the case with the successful Michael Grandage's production at the Donmar Warehouse which won an Olivier Award.  Grandage is today known for his stellar star casting play productions in the West End.  Maria Friedman produced this version in conjunction with Mernier Chocolate Factory.  The performances began in 2012 at the company's venue in Southwark.  The production transferred in the West End last April.

I was impressed how the scenes were choreographed and went back into time over three decades covering the lives of Franklin Shepherd (Mark Umbers), Mary Flynn (Jenna Russell) and Charley Kringas (Damian Humbley).  I loved how the musical numbers blended in nicely to the mood of the characters and scenes such as Old Friends, Growing Up and Our Time.

It was a wonderful feel good musical centring around friendships of three people over three decades and how their outlook on life changed over the years.  I think the setting of the show is unique as it was 'rolling back the years'.  There were some various themes raised such how one's life journey especially in show business is affected by dreams and reality in order to break into this profession.  Sondheim took the opportunity when he agreed to compose and write Merrily We Roll Along and said he would like to 'roll myself back' to his early days and be 'stripped back to our innocence' (Source: John Wood).

The musical was performed by an exceptional and energetic cast who put their all into it.  A special mention goes to Glyn Kerslake (who played Joe Josephson).  I saw Glyn as twice as the Phantom in The Phantom of the Opera in 1999.  It was great finally to have said hello to him at stage door after the show.

Sadly the musical has now closed but I do hope this production will either return to the West End or go on national tour in the not too distant future.  I'm sure I'll be seeing future productions where Sondheim is mentioned in the credits later on this year.  It was a wonderful evening and I think from my re-introduction I'm becoming a Sondheim fan!
Posted by Dawn Smallwood at 07:02