A Play Within A Play! 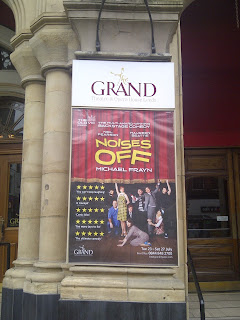 I was intrigued seeing Noises Off since hearing good reviews about Michael Frayn's comedy when The Old Vic did a revival of the production directed by Lindsay Posner.  The revival transferred to the West End afterwards and it's currently touring around the country including a stopover at the Leeds Grand Theatre.

Noises Off is a plot about a play with hilarious consequences.  The setting for Act One is the dress rehearsal of 'Nothing On' where the whole cast are literally unprepared.  It seems Mrs Clackett (Dott) was good remembering the 'Salmon' lines!  The second Act is set backstage of a North of England Theatre and the audience is able to see what happens backstage. The act mainly focuses on the strained professional and personal relationships between the theatre manager, the crew and the members of the cast with comical repercussions!   The final act brings the final venue of the touring play and things go even more wrong!

I laughed from the beginning to the end.  When the plot with no plot unraveled in the comedy, I was in stitches during the comedy and afterwards.  It certainly was a perfect 'pick me up' for a mid week treat and to mark the beginning of my 9 shows week (at the end of July) in Leeds and London.

I hope the comedy returns either in London or on national tour and it's a comedy I highly recommend.  Please check this link for further information.