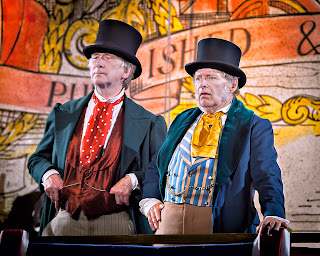 
The National Railway Museum comes alive with this exciting production, jointly produced by York Theatre Royal, National Railway Museum and Pilot.  Co-writers Mike Kenny and Bridget Foreman analyses the rise and fall of George Hudson (who was known as the 'Railway King' and politician) and the life around his era in the 19th Century.

The first act takes place in and among the museum's Great and Exhibition Hall.  Everyone assembles to await the arrival of George Stephenson (Ian Giles) and George Hudson (George Costigan) on a 'Rocket' replica.  Hudson shares Stephenson's vision following their rendez-vous in Whitby to expand and link the country's railway lines.  The audience is then divided into groups and are transported to different exhibitions where one receives different stories about people livelihoods, performed by a cast around 200, around the railway and their prominence during Hudson's dominion. 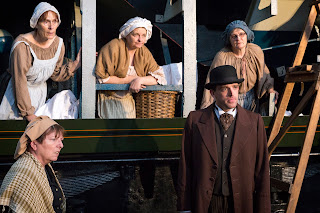 
The untold story is told by many; they share with the audience how easy it was to buy a piece of potential fortune, amidst risk,  through purchasing shares in the railway, volume of migrant workers, often in notorious conditions, fulfilling Hudson's vision including the East Coast railway line from Newcastle to London, and life in general of people across all classes.  The rivalry among the different railway companies didn't go unnoticed particularly with the introduction of the Railway Clearing House and significantly Hudson's dodgy financial dealings.  Parallel to stories one hears today!

The production continues with the second act at The Signal Box Theatre, York Theatre Royal's temporary residency during the theatre's redevelopment.  The story continues with Hudson's downfall and its impact on the railways and the people involved.  The action takes place centre stage with a railway line running through which gives a vivid feeling of being part of the action. 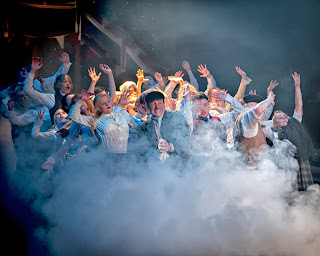 
Co-directed by Damian Cruden, Juliet Forster and Kate Posner; this production is certainly one big 'extraordinary theatrical event' involving a impressive number of 487 volunteers! The logistics must have been a challenge but the creative team and cast rises to it beautifully and delivers and co-ordinates to the highest of high standards. 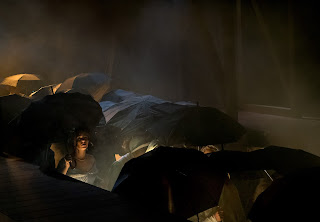 
The dedication and the commitment of everyone specially the volunteers is very much admired. Similar to the past community productions such York Mystery Plays and Blood + Chocolate (produced in conjunction with Pilot and Slung Low), In Fog and Falling Snow is produced on a massive scale which ignites the enthusiasm and community spirit York is known for in promoting its unique social history.

This production is unmissable! 5+ Stars!
Posted by Dawn Smallwood at 14:39