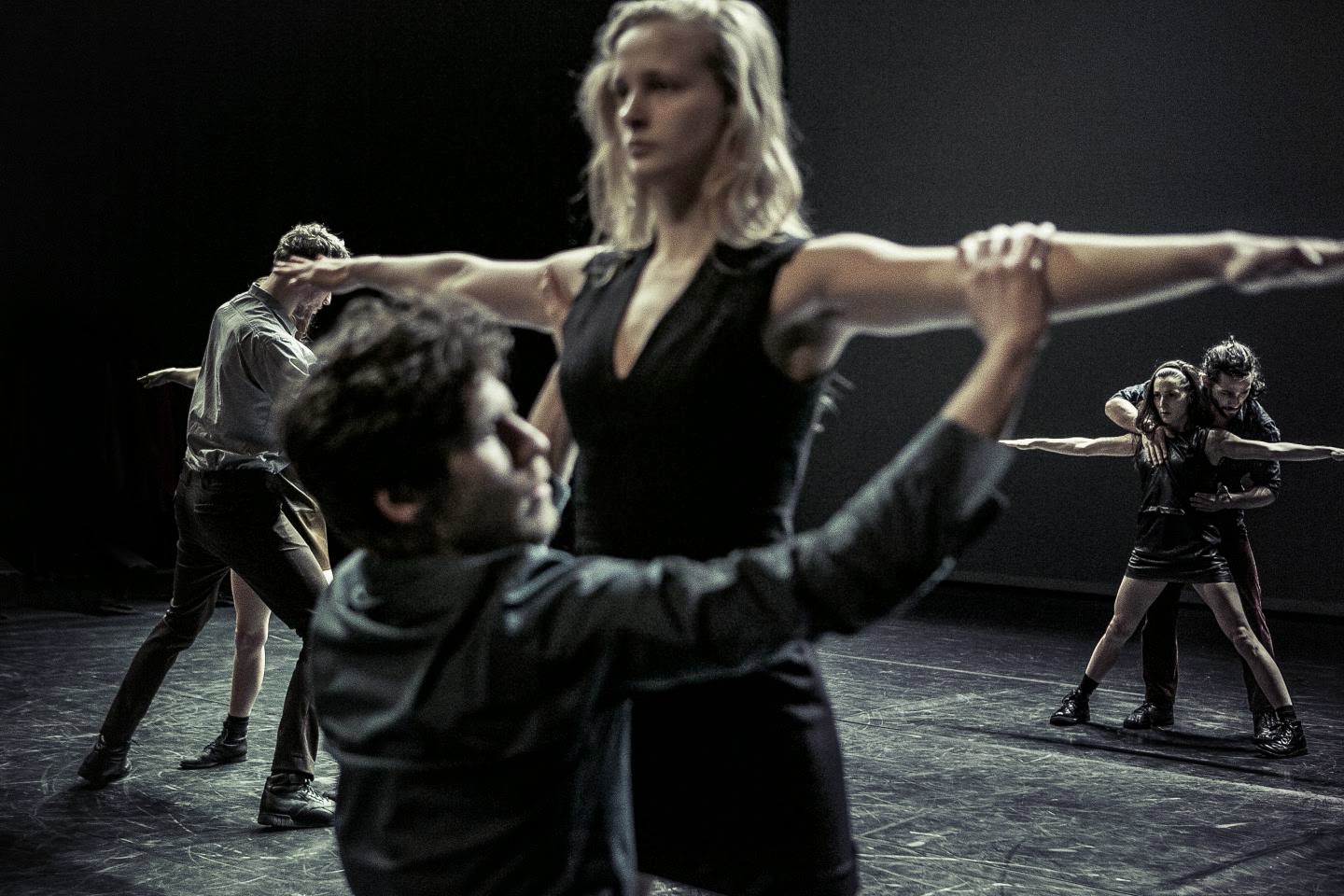 Ultima Vez's What the Body Does Not Remember
Photo credit: Danny Willems

Wim Vandekeybus brought his award winning company, Ultima Vez, to Doncaster's CAST.  This production focuses on themes primarily instinct, risk, impulse, unpredictability and survival.  This production links to his quote as the reason for What the Body Does Not Remember;

"What the body had to do without having a choice. Where the survival instinct has to return, using our instincts and its reflexes, what the body has to do find its way out!" - Wim Vandekeybus


The production is divided in six sections which each begin with an empty space and dim lighting.

Hands, composed by Thierry de Mey, is exploring how various of sounds can control movement.  A woman sits at the table and taps, scratches, brushes, slaps and thumps the table which the two dancers react to with floor sequences.  The body shifts sequences are sharp, energetic and fragmented to each sound.  There is an atmosphere of suspense and the dancers experience the stillness.  The low lighting and white strips give the strobe effect when the dancers are performing.

Stones is Peter Vermeersch's piece which is based on Jean Baudrillard's Fatal Strategies.  It looks at excess and how meaningful things really are when they get too much meaning.  The music is minimal at the beginning with strings and clarinets then the tempo intensifies with brass instruments which certainly drives the physical movements and activities to the limit.  The dancers are engrossed in their own thoughts and activities.  This 'internal focus' is stirred by curiosity where they participate in balancing, building, toppling and stepping on to the blocks.  During the last bit of the section the dancers have a connection and awareness of each others presence through the fast paced activity of the blocks being thrown to and caught by one another.

Towels is based on Robert Bresson's film Pickpocket.  Composed by Peter Vermeersch this place creates accidents with an aim to steal.  Jackets and towels are the 'focus of desire' for developing and exploring movement.  This is illustrated with an exchange of jackets between the dancers with stopping and starting thus sharpening the dynamics.  Human contact and friendliness appears with physical and emotional connections but one is fooled when they are distracted unbeknown that either their jacket or towel is stolen.  Such tense slick choreography.

Thierry De Mey's Frisking is people making physical contact which appears invasive in form of an Argentine tango.  Variations of physicality between a man and woman are observed and measured from the soundscapes and music.  It is shown in the couples; the man wants the woman but she isn't interested and vice versa.  Throughout the provocative production it explores a wide range of human emotions varying from passion, tenderness to aggression.

Stories are linked to Poses.  Thierry de Mey's piece encourages one to approach stories from a different angle.  The use of chairs are illustrated showing their displacement in offering dancers to deconstruct and recreate stories as shown in the movement sequences.  Variety of emotions are shown physically ranging from sheer aggression to blowing of three feathers representing lightness and calmness.

The Finale is linked to the pieces already performed where the audiences are reminded again of the themes and its physical elements.  An exploration of hands and feet creates a catastrophe of a kind, a loud and intense crescendo and links appropriately with;


Instinct, impulse, reaction and such happen and not planned.  One simply appreciates expecting the unexpected.  A fantastic production performed by a talented international cast of dancer and its creative team.  This production offers a lot of potential for inspiration, innovation and creativity on and off stage from a humanity perspective.  The physical movement certainly draws the audience in and there is a lot to explore beyond the stage!

Source: Ultima Vez What the Body Does Not Remember Resource Pack
Posted by Dawn Smallwood at 03:12