This review was originally written for The Public Reviews and the review can be accessed here: 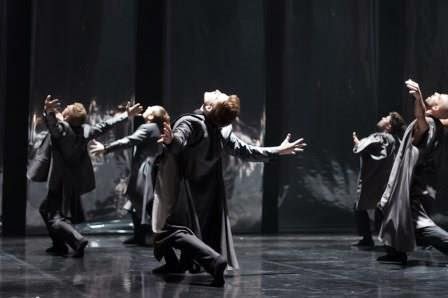 
2Faced Dance Company is currently presenting their double bill, Dreaming In Code.  The award winning all-male dance company is known for their innovative performances that tell stories which are relevant in today’s society.

First of all, young artists from D M Academy, working in partnership with 2Faced Dance Company, perform Half Remembered Dreams.  The music is primarily based on Edith Piaf’s ‘Non, Je Ne Regrette Rien’.  The talented artists interpret the music beautifully through dance and movement, reflective of how fragments of dreams are remembered with a mixture of nightmares and pleasantness.  There is a lovely touch with the use of roses, demonstrating one of the impacts that dreams can have.

Following on is Eddie Kay’s Milk Night.  Set in campsite during the night, men are in a world without the existence of women.   With a narrative beginning and a combination of theatre, visuals and physical movement, men self-examine themselves by sharing their inner emotions; questioning their existence and crucially recalling their experiences about women they once knew and loved.  The fast tempo of the music increases the men’s intensity and insecure predicament where despair and frustration takes over, combining the fears of forgetting what they hold dear from dreams and memories.  The transitions between the interpreted scenes could have smoother in places, but overall Milk Night is an intense and thought provoking piece of art.

Tamin Fitzgerald’s Lucid Grounds is certainly the double bill’s highlight.  Luke Evans’s mirrored set with smoke haze and James Mackenzie’s lighting implies how the men recall their memories through obscured realities and highly charged emotions.  The variety of physical movement with solid choreography to Alex Baranowski and Angus MacRae’s music portray the men’s past eventful memories and how their stories of today are shaped.  At the end of the programme dramatic interpretation of the music gives a real awakening with the men embarking on their personal journeys.

The company presents a combination of theatre and dancing where the athleticism, agility and unison dancing by the cast are admired.  The enjoyable double bill shares how dreaming can have a vivid impact on shaping anyone’s present and future.  As Alfred Lord Tennyson once said:


"Dreams are true while they last, and do we not live in dreams?"