The Full Monty on Stage! 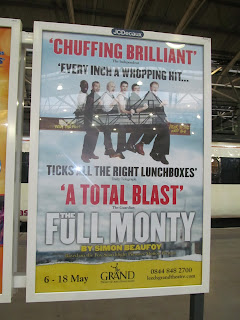 Look what greeted me when I returned from a long and weary journey! (Leeds City Station) 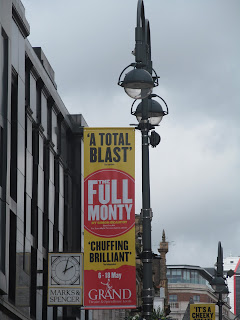 I was intrigued to see The Full Monty being interpreted on stage by Sheffield Theatres and also written by the award winning writer of the film, Simon Beaufoy.  I love the movie and I'm attracted to the social, political and economic messages which were relayed to the cinema goers.  I booked myself a ticket to see the Beaufoy's play based on the motion picture at my local theatre, Leeds Grand Theatre.  I've heard good reviews about the comedy (even if I ignorantly thought it was a musical initially!) so I was really looking forward to it. Leeds is the last stop to host the production before it transfers to the West End in February next year. 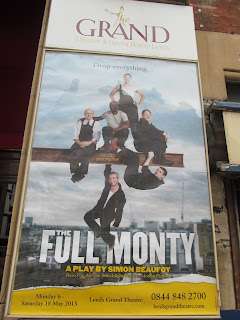 
It attracted a full audience and I never seen the Upper Balcony, where I sat, full to the brim since Phantom last year! I just couldn't see any empty seat even in the Side Balconies where I usually sit as I usually go and see shows on the cheap haha!

I wanted to appreciate the comedy's context in order to appreciate fully the messages which lead to the former Sheffield steelworkers deciding to 'drop everything' for economic survival.  There were a number of issues which were raised and explored such as the decline in the steel industry since the 1970s, the Thatcherism era and its policies, the freedom of investment for redevelopment of old factory sites and the sociology itself.  It was heartening to see the former steelworkers' determination to keep positive and hopeful for survival despite the various setbacks and struggles from society and its usual conformations.

It was such a moving comedy created and performed by a talented team, cast and crew and it caught the audience's interest from the word go!  There was an interactive buzz throughout! I laughed from the moment the play started until I left the theatre for catch my bus home!  I felt at home with the local language used with its dialect and idioms with the story set not far away from here.

Following The Full Monty I'm inspired to see plays, comedies and musicals which have a central theme for members of the community who look for creative and brave ways for surviving whether it's physically, mentally and emotionally.  Thanks to this play I'm excited to see Brassed Off, a play which the Bradford's Alhambra is hosting next year and The Commitments at the London's Palace Theatre.

You can find out further information clicking on to the website .
Posted by Dawn Smallwood at 14:29