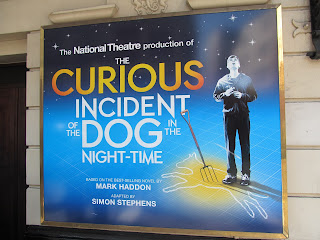 I was intrigued with The Curious Incident of the Dog in the Night Time from hearing about the novel by Mark Haddon and The National Theatre's production adopted by Simon Stephens which was on at the Cottesloe Theatre.  I studied bits of the novel in one of my final university modules and its themes and messages relate greatly to my personal life and journey I'm having to make.  So my curiousity has begun from that point forward! 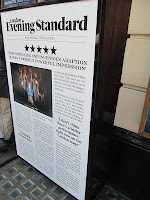 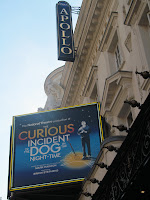 When I saw Great Expectations in February 2013 in London I saw the production advertised in the programme and booked it soon after!  It was encouraging to hear the positive reviews from the previews and press night.  My confidence and positivity about the play was consolidated when  The Curious Incident.. won seven Oliver awards including best play, best actor (Luke Treadaway), best director (Marianne Elliott), best lighting (Paule Constable who also did lighting for New Adventure's Sleeping Beauty and the touring production of The Phantom of the Opera).  Some of my friends had already seen it at the Apollo Theatre so I had high expectations and a positive frame of mind.

From beginning to end I was blown away with the performance by the talented cast especially Luke Treadaway's portrayal of Christopher Boone and loved the the stunning visual staging.  It's interesting what can be interpreted on stage with a lack of props and  the creative use of lighting and video for its effective use of space on the stage.  I was able to relate my personal journey with its triumphs and struggles through Christopher's characteristics and determination.  I feel the play highlighted the social circumstances he lived in and where he and members of society found one another confusing which caused a general lack of understanding.

I feel the play has positive vibes especially relating to Autism and Aspergers Syndrome and also the curiousity and optimism which I think are the messages the play was getting across.  Christopher's journey challenged existing attitudes to disabilities and at the same time one can recognise  his extraordinary talents and abilities especially academically.  It was heart warming to hear Christopher say 'I can do anything' which offers hope for fellow people who are autistic and have Aspergers Syndrome.  I highly recommend for anyone to see this wonderful play and I plan to see it again in the summer. 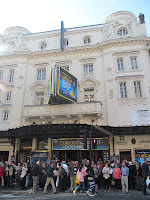 During the interval I looked at a fascinating exhibition by 'Ambitious about Autism'.  Some of the displays were moving and how those who are autistic make sense of the world and those who live in it  through communication, independence and uniqueness.
No doubt definitely a theatre highlight so far this year : ) 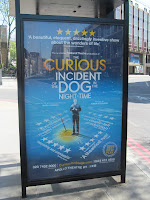