Since watching the Great Expectations movie starring Jeremy Irvine, Helena Bonham Carter, Holliday Grainger and Ralph Fiennes last year, I have been inspired to read the novel again.  I have read the novel before but I wasn't moved and in all honesty I then wasn't a fan of Charles Dickens.

However, being a Humanities graduate, my attitudes have changed towards approaching literature whether it's a classic or contemporary works.  I decided to approach Great Expectations from a humanities perspective such as the characters and their life journey amidst the society and its systems that were then in place.  Each character in the novel are of such contrast to one another and this enhances the classic.  Reading the novel the second time was much more enjoyable.  I appreciated the characters a lot more and learnt more of its social history at the time Charles Dickens had written the book.

I learnt of the stage version, adapted by Jo Clifford, at the end of last year.  Clifford had begun putting plans to adapt the play since 1988 and it had opened in Glasgow in May that year.  It subsequently did a tour around the UK and some of the countries in the Commonwealth. 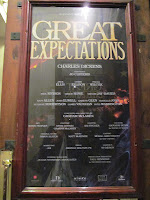 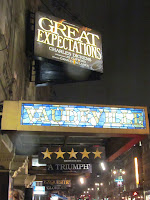 Following further rewrites of Great Expectations including the current London production presented by Beckman Union which opened on 1st February 2013.  There was a gala performance on 7th February which was live streamed to selected UK cinemas.  I had an opportunity to see it in Leeds but I decided not to in the end as I was seeing it that following evening (8th February 2013)!

I knew, according to reviews, that the adaptation would be very different to what one would expect of the production.  It isn't a play that you can follow literally and a change of approach is essential in order to appreciate it.  It is important to focus on the characters and what they had to face in society at the time in order to accomplish their goals and expectations. The London production is presented to coincide with the celebrations of the International Dickens Bicentenary.

I was reading up the write up Jo Clifford did for the house programme I bought and the characters in the classic (or other Charles Dickens's classics) can apply to a variety of individuals in modern day society who are trying to accomplish their goals and having high hopes for the world to be a better place for themselves.  Clifford concluded, which I agree with wholeheartedly, that appreciating Charles Dickens will 'help strengthen and our personal hopes and expectations of a better world' (Clifford, 2012).

On to the play! To my delight I've got an upgrade to the Dress Circle even if I couldn't help being concerned about the attendance at that evening's performance and having to close the Grand Circle.  I expressed my concern to one of the ushers and she said that they are in the midst of promoting the play more widely.  I just hope it will attract more people to book and see the play. 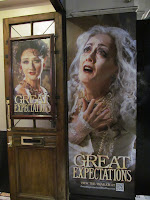 What I liked about the play was all the action happened in one room, Miss Havisham's room in Satis House.  This for me meant less distraction and more focus on the characters themselves.  This made my approach to the play a lot easier.

I like how the Older Pip (Paul Nivison) narrates the story and the relevant characters appear on stage as and when the story told with the relevant actions.  The story's dialogues and the interaction of the characters worked well together and it flowed nicely.  I particularly loved the cast especially Paula Wilcox (Miss Havisham), Grace Rowe (Estella), Isabelle Joss (Mrs Joe), James Vaugham (Wapole/Wemmick) and Chris Ellison (Magwitch).  I also love the wit and humour from the characters of Jaggers (Jack Ellison).  In all it was an excellent first class casting!

I love the stage design set up and its props.  The lighting was incredible and interacted nicely with the stage.  I loved the music score which was played before the opening of Act one and during the performance. 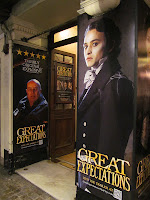 Overall it was an excellent play and well received by the audiences.  I do highly recommend it and the booking of the production is until June.  Here is the official website.  I really hope it does well and subsequently extends in the West End.  I'll endeavour to promote the production to my theatre going friends and via Twitter.  I've just learnt that one of my best friends has booked to see the production. So good all round so far.

A big thanks to the creative and productions team and the play is supported by The Dickens Legacy.