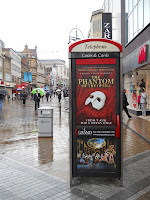 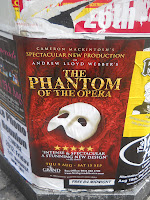 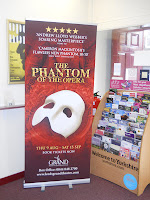 I waited in sheer anticipation for The Phantom of the Opera to come to my home city in August!!! I've managed to see the tour production so far in Plymouth, Manchester and Bristol.  The evening came when Mum and I went to the second night of its opening in Leeds. I have not look back since followed by a total of 10 visits to the show during its run at The Grand Theatre.

It was a pleasure to link up with fellow Phantom Phans including Vivienne, Pearl, Naomi and Jeanette.  I even had an opportunity to do a backstage tour of the phantom sets, props and costumes during the Heritage Open Day in the first week in September where The Grand Theatre opened its doors to the public.  We even saw the principals' dressing rooms and we met the tour manager, Christy, who was happy to answer any questions about the running of the show and the show in general.  We were able to touch some of the costumes and I was amazed how heavy they are!  We also saw information on how the phantom's make up is applied.  I felt I was honoured to go backstage during the run of my favourite musical in my favourite theatre! Unfortunately photography was prohibited so there is none to share!

As well as Phantom I even did a bit of sightseeing in my home city and travelling in West Yorkshire.  My friend, James -a big musical theatre fan, came up to Leeds at the end of August to see Phantom and we spent the following day exploring West Yorkshire where we visited Esholt (Emmerdale fame!), Baildon and Saltaire. It was great to combine our love for musicals and travel during the weekend!


As well as seeing John Owen Jones wearing the mask it was nice to see Richard Woodford and Greg Castiglioni donning the mask at some performances even if it was unfortunate that John was ill whilst some of the time in Leeds.

What a great summer it was! Six weeks of Phantom in my home city!  I am very proud for Leeds to host my favourite show and The Grand Theatre's box office broke sales records on the first day the tickets went on sale! Next stop, Edinburgh!
Posted by Dawn Smallwood at 13:20