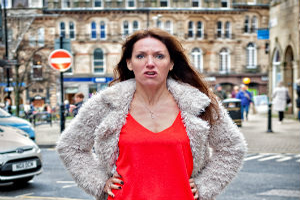 Harrogate was voted as the sunniest place in the UK...

Going to the Promised Land

Harrogate was reported in the press the 'happiest place to live in Britain'.

Harrogate is perceived to be this typical English spa town to many visitors, particular to the wealthy who were originally drawn to the town's waters, and they are drawn to its cliches.

Loaded in Harrogate, however, tells a different a different story about the town's community. The production is a reworking of David Bown's 1999 award-winning comedy, Loaded.  The story is about three local mechanics who had enough of their wealthy Porsche clients' demands.  Following the sharp increase of armed robberies in the town centre, where cross border perpetrators who views Harrogate as 'a sort of "honey pot of riches"', the mechanics wanted to be part of the action.  Only for the trio to face hilarious and devastating consequences.  Carol (Sue Mitchell), a vulnerable partner of Pete (Andy Murton), and she is fighting her own battles in a place she considers being lonely and not belonging

Accompanied with localised references, local Indie and popular music (featuring Nina Simone's Here Comes the Sun, Black Ocean's Sick Inside and KLF's It's Grim Up North), Loaded in Harrogate is a dark comedy specially adapted for the town and explores what really matters and challenges existing perceptions.

Don't Take Your Guns into Town

Many in the audience no doubt relate to the relevant themes such as relationships, welfare, expectations and disappointments alongside insecurities and loneliness.  Loaded is figurative as well as physical.

Alexander Swarbrick's staging is sterile, serves its purpose and is used to the maximum effect.  It fits well with the play and its themes and this also compliments with the lighting. The backdrop video visuals are used for illustrating the town centre and its environs.  All is cleverly choreographed with the mentioned musical and local radio, Stray FM and courtesy of Alex Cann.  Appropriate creativity throughout are certainly well thought out and prepared.

Personal stories are shared among the characters whose struggles and disillusionment drives them to crime, violence and self destruction.  This powerful production certainly challenges existing perceptions of Harrogate and thought provokes.  The local talented cast of Lee Bainbridge, Keith Hukin, Andy Murton and Sue Mitchell portrays enthusiastically and excellently the fast paced play's stories.

A highly recommend production is playing at Harrogate Theatre until 12th March 2016.
Posted by Dawn Smallwood at 01:27