Known as the Romance of the Three Kingdoms 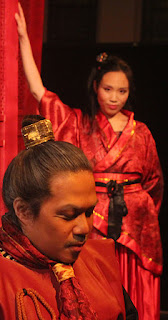 
Red Dragon Fly Productions brings Diao Chan The Rise of The Courtesan to tour in 2016. The current production is part of a three year Chinese Classic Programme.

Diao Chan is a fictional character in San Guo Yan Yi by Luo Ghan Zhong.  The book is about the latter days of the Han Dynasty and the war torn era of the Three Kingdoms.  This production is set at the latter end of the Empire and how its threat of power become real.

There are many portrayals of Diao Chan however in this production she is a courtesan who sang and perform to subjects of the Empire.  Ross Ericson draws on Diao Chan as an individual in her own right than just another woman.

Michelle Yim confidently portrays Diao Chan as a woman in her own right.  Questions the woman's role in then a predominantly masculine Chinese society.  Argues with LuBu (Arthur Lee), DongZhou's bodyguard, about what is expected from women and she asserts definitive qualities that equate to men's.

Diao Chan through her soliloquy asserts that women are equal to men; they aren't an ornament to be seen or a commodity to be used; and complains how the women's spirit is caged and like tigers that are domesticated.  She is determined to break this 'yolk' even if it means seduction, manipulation and an ultimate contribution to the downfall of a dynasty.

This colourful production has characters dressed in traditional bright costumes which are assisted with props reflecting the era.  The traditional music and lighting are atmospheric and the percussion play during the change of scenes.  Narrative summaries are given between some scenes about the state of the Empire.

The main theme is about women and their positions in the Empire.  It also explores power and tradition and exposes the Empire's attitude towards women particularly with child bearing and internal ranking. Sadly similar situations are still seen in modern times where women have very limited rights or freedom.

An enjoyable production by Red Dragon Fly Productions which gives everyone an opportunity to know more about ancient Chinese cultures and traditions.  Yet at the same time drawing out the themes that are relevant today than in the 21st Century.

Next year they will bring Monkey: Journey to the West to conclude their three year Chinese Classic Programme.
Posted by Dawn Smallwood at 08:51