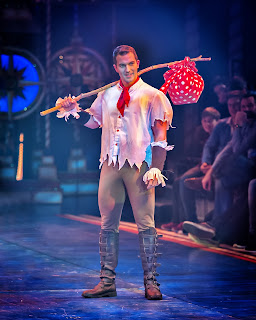 For one year only, the pantomime is playing at The Signal Box Theatre, York Theatre Royal's temporary residence, during the theatre's redevelopment.  Dick Whittington and his meerkat is a one off opportunity for panto fans to enjoy close up! The moving action takes place centre stage on a railway track following the successful The Railway Children in the summer. 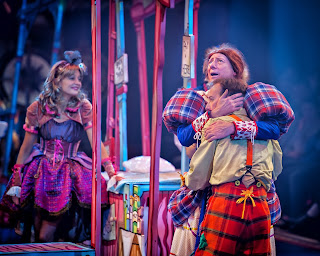 Kaler is the undisputed star of the show as Paloma Polony.  As a first timer, one can see why!  His damsel qualities required for a pantomime shine through with radiant energetic interaction with fellow characters and the audience.  Not forgetting the silliness, adventure, fun and humour which are expected in pantomimes.  Rejoining Kaler is Martin Barrass (Wind in the Willows and The Railway Children) who switches contrasting roles from Willy Polony to the protective Mayor Cheapskate; Suzy Cooper, the attractive and adorable Charlotte Cheapskate and David Leonard, the villainous Herman Vermin. 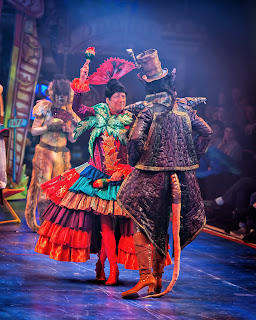 The story of Dick Whittington is not literally told straight; there are the expected additional elements even a film, The Loco-Motion starring Kaler et al and BBC Look North's Harry Gration who signals Dick Whittington (Vincent Gray) to turn back!  There is a underwater feature running between the audience.  Mr Finickerty's heroism is celebrated with a song adapted from CATS' Mr Mistoffelees. Of course, as one expects, there is an abundance of comedy, slapstick and 'facts' containing familiarity, local references and innuendoes along with name mentions and greetings and thanksgiving.  Familiar tunes play and sung out in the action and all choreographed by Grace Harrington. 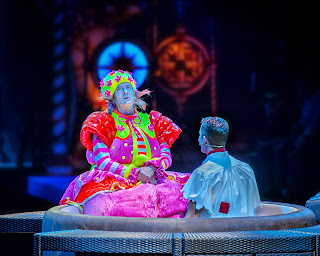 Dick Whittington is an experience one won't ever forget. So much laughter from beginning to end! There is the occasional jeering to when Herman Vermin and his furry but cute rats make their appearance on stage.

Mark Walters' colour and eye catching costumes and staging sets the mood for this pantomime.  The production is in its early day however bear in mind, particularly for very young audience members, that this performance ran over two and half hours including an interval.  Still this length provides first class entertainment for adults and children alike.

Should I see this pantomime? Oh yes you should! A truly a festive treat whether before or after Christmas.  A pantomime not to be missed!