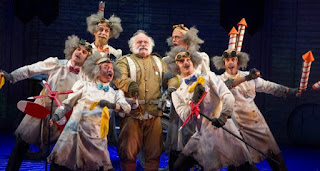 On arrival to the West Yorkshire Playhouse, themed decorations and props hint that something big is about to happen, and they would be right. Ian Fleming’s Chitty Chitty Bang Bang is the theatre’s biggest ever Christmas show.
Fleming’s story, which the author sadly never saw published, was adapted for film in 1968 with Richard M Sherman and Robert B Sherman composing the music and lyrics.  Jeremy Sams originally produced the show for the stage in 2002, with the Sherman Brothers writing four new songs in the process.  This lavish production opens in Leeds and will be embarking on a tour playing in a number of UK towns and cities during 2016.
The narrative revolves around Chitty, the motor vehicle, who is the life and soul in terms of adventure and imagination, as well as being something of a status symbol.  It was a three-time Grand Prix winner before the First World War, only to later fall into rack and ruin before Jeremy and Jemima Potts’ (Henry Kent and Caitlin Surtess) discovery.  The valuable car is sought after by the villainous Baron and Baroness Bomburt (Don Gallagher and Tamsin Carroll) who are determined to take the car back to their kingdom of Vulgaria.
What stands out in this superb production is Simon Higlett’s colourful and breathtaking staging, perfect for the year in which the production is set, 1919.  Higlett’s staging works extremely well and uses visual and moving projections to depict the scenes, and it is a real treat to see how the car ‘moves’ on land, sea and air, thanks to these projections. The lighting and technology, courtesy of Ben Harrison, Tim Mitchell and Simon Wainwright, supports the staging well and keeps the audience’s attention and awe throughout the performance, complemented by Stephen Mear’s slick and charming choreography.
Contextual themes in the production link to the First World War: patriotism and duty evident through Grandpa Potts, while Caractacus Potts’ is fighting for survival through his ambitious inventions. There are enemies of the war, for which Vulgaria is symbolised, and quintessential British charms and traditions such as the Morris dancing in Me Ol’ Bamboo in the first act, while Truly Scrumptious riding a motorcycle and demonstrating her knowledge and capability of the vehicle, wonderfully highlights female emancipation.
The performances are outstanding, with Jon Robyns (Caractacus Potts), Amy Griffiths (Truly Scrumptious) and Andy Hockley (Grandpa Potts) leading this exceptional cast.  It is a show full of highlights, but another that deserves mention is the wonderful Team Bon Bon, an ensemble of talented children, performing and singing in perfect unison Teamwork, down in the sewers. Maximum audience participation is guaranteed, with the cast especially joining in with the infamous Chitty Chitty Bang Bang, when the car makes its perilous journey to the known and unknown.  The emotive and even hypnotic Hushabye Mountain by Potts is incredibly moving, as is the heart changing Lovely Lonely Man by Truly.  The Childcatcher (Stephen Matthews) is promised jeers and the colourful and energetic The Bombie Samba seduces one and all.
Chitty Chitty Bang Bang certainly has something for everyone.  For children, it is a sense of adventure, imagination and creativity, while contextual themes are thought out by generations alike.  This is a truly fantasmagorical performance that opens up many opportunities for unique interpretation and unadulterated enjoyment. A must see this Christmas.