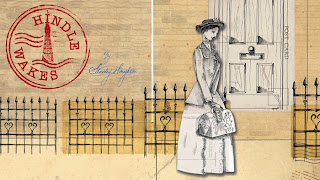 At the boom of the cotton industry in the early 20th Century, the story tell us about Fanny Hawthorn (played by Natasha Davidson), a mill worker, and Alan Jeffcote (played by Tristan Brooke), a mill owner's son, who spent an illicit weekend away together at the seaside.  For obvious reasons at the time they had to keep the affair a secret until a dramatic turn of events exposed their weekend away.

Houghton wrote the play in 1910, a time when women rights came to the forefront and at the height of the women's suffrage, and one can think of  the local activist Emmeline Pankhurst.  Like the women then Fanny fights for the right to be independent than conforming to the traditional lifestyle which was expected by doing the 'right thing' such as getting married and being an 'honest' woman.

Hindle Wakes is humourous particularly James Quinn's Nathaniel Jeffcote as well as controversial and celebrates and consolidates the early women's emancipation and their say in society at the time.  Great direction by David Thacker who kept the authenticity of the era with Lancashire's cotton industry and how important Wakes Weeks were to the mill workers. Crucial social issues alongside women ones were directly and indirectly raised in the play. 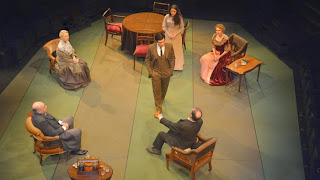 An enjoyable play that keeps the audience entertained throughout the two hours which a talented cast and creative team successfully delivered.
Posted by Dawn Smallwood at 06:51