Lonely in a Vast Landscape!

West Yorkshire Playhouse's production of Of Mice and Men is the perfect play for raising a number if issues and feelings familiar with human beings today as well as in the Great Depression era.  John Steinbeck's Of Mice and Men, published in 1937, explored the nature of human beings and how the aftermath of the Great Depression years of 1930 had an impact on the workers. 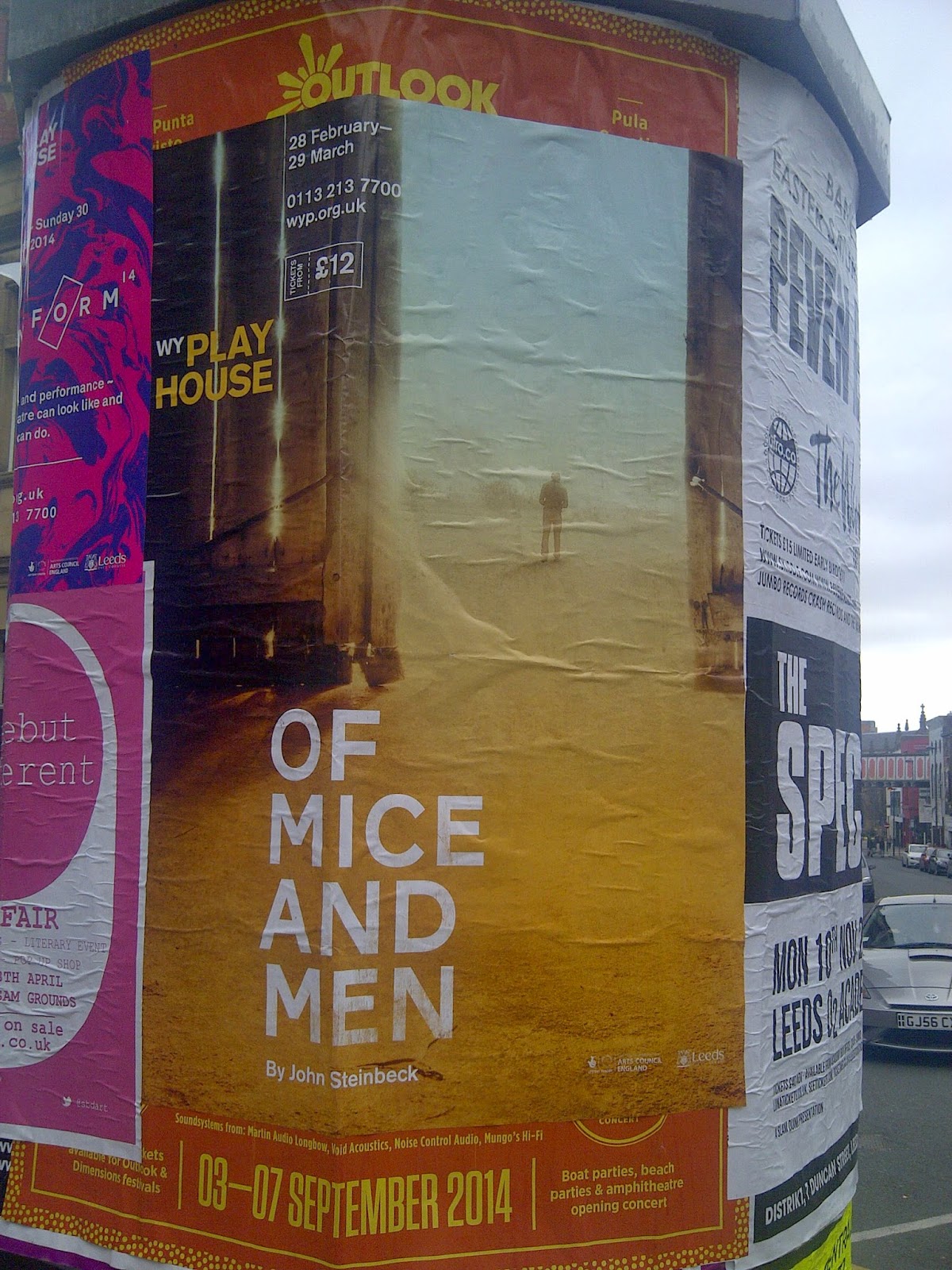 Loneliness and isolation were a couple of the messages raised from the play and a focal point in this review.  George (played by Henry Pettigrew) said to Lennie (played by Dyfing Morris) that 'Guys like us, that work on ranches, are the loneliest guys in the world.  They got no family.  The belong to no place...' and poignantly concluded, 'They ain't got nothing to look forward to' (Steinbeck, 1937, p. 15).

Three characters came into mind during this production who experienced loneliness and isolation through marginalisation and ignorance in general society at the time.  Crooks (played by Kesley Brookfield), a black worker, experienced racism and race segregation, prevalent in the 1930s.  Lennie (Dyfing Morris) had learning disabilities was misunderstood by all in his society.  His actions perceived innocent only led onto devastating consequences.  Curley's wife (Heather Christian), unhappily married to Curley (played by John Trindle), experienced loneliness along with domestic violence.  Her situation would have raised issues about a woman's role in society along with gender equality which is still the case today.

Loneliness linked into the great set cleverly designed by Max Jones and the co-ordinated lighting and sound by Tim Mitchell and Rick Walsh respectively.  What struck the stage was the abundance of space representing the open American fields and its expanse!  Mark Rosenblatt, play's director, was keen to use Quarry Theatre's to maximise this space to reflect the vast openness for the play's landscape (from an interview in Of Mice and Men Programme, 2014). 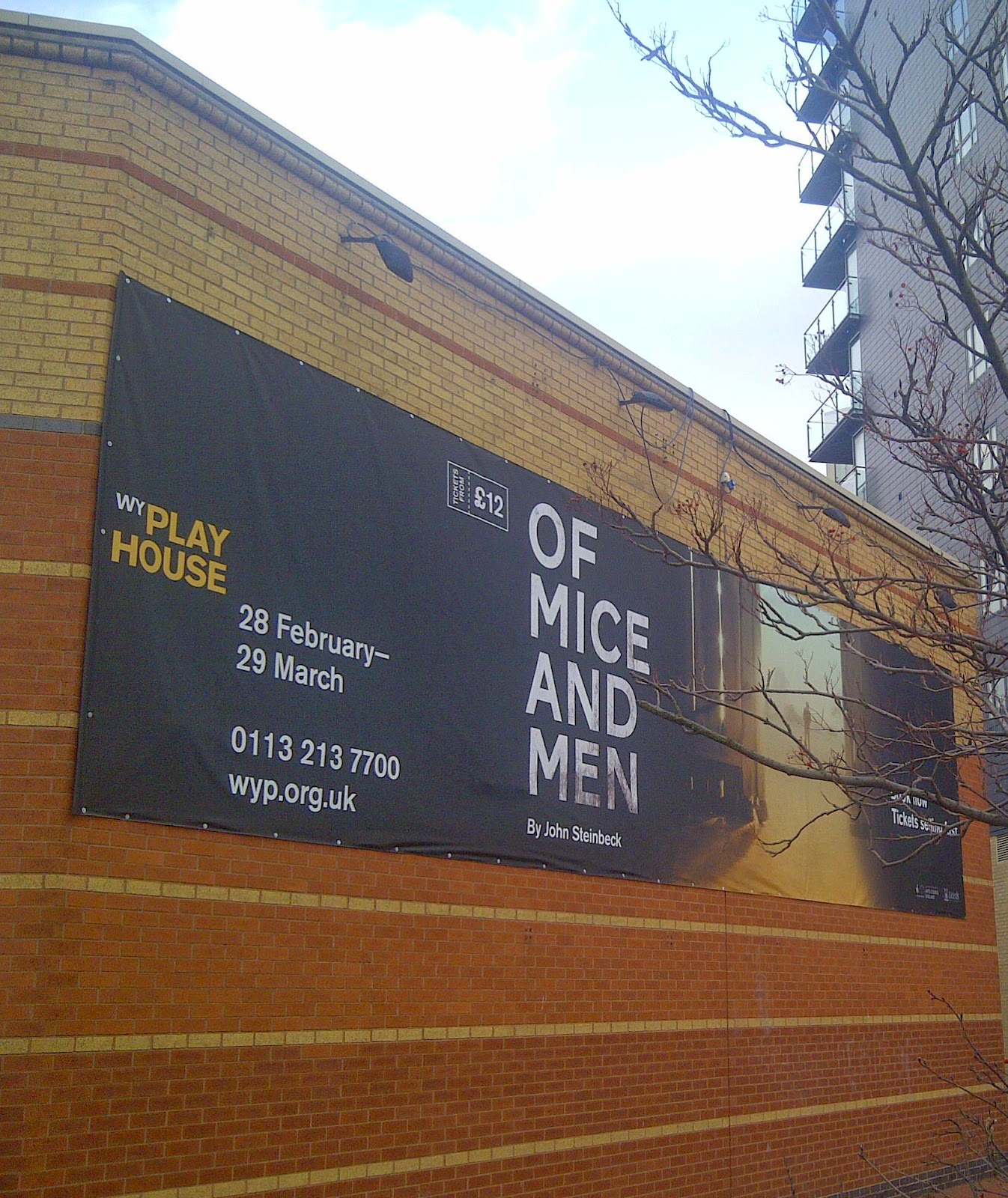 Rosenblatt collobrated with Heather Christian, production's musical director as well as playing Curley's Wife, who produced American hymnals - influencing and linking the character's emotions and their environs.  Christian believed the characters were looking something beyond their loneliness, possibly hope?  Hope was something George, Lennie and Candy (played by Johnson Willis) had which was a dream of owning their own ranch.  Curley Wife's dreamt of becoming famous in Hollywood.  Hope was their strategy for dealing with their loneliness and isolation they experienced day in and day out.
The cast were incredible and portrayed the characters as to how, one thinks, Steinbeck would like them.  This excellent play is very appropriate for the modern contemporary audiences today.  Loneliness is very common in today's society and many lonely people took their dreams, goals and aspirations to cope with their predicament just like Of Mice and Men.  James Brining, West Yorkshire Playhouse's Artistic Director, said in his welcome in the play's programme about 'profound questions about humanity and our place in the natural world'.  Very much so! A production highly recommended for all! Of Mice and Men - catch them while you can!