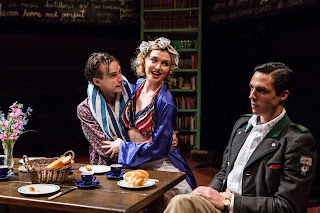 The comedy is about a group of young men who spend the summer at a French school to intensely prepare for their Diplomatic exams; the preparation doesn't go to plan as their focus is interrupted by the presence of Diana Lake (Florence Roberts), a beautiful though flirtatious visitor.

The men are seemingly in love with Diana; Kit (Joe Eyre), Bill (Tim Delap) and Alan (Ziggy Heath) and their feelings for her dominate them. Diane's return of love to each of the men is uncommitted and takes in her the stride the love they all have her.  To make things more complicated Jack (Jacqueline) (Beatriz Romilly) is in love with Kit.

Rattigan writes ahead of his time and certainly pinpoints the young men's masculinity and its appeared arrogance but beneath reveals their insecurity and vulnerability particularly experiencing women and romance.  Their attitude and preconceptions, indoctrinated by the expectations and culture at the time, toward women is unsurprising and states "an ideal woman with masculine virtues and feminine fiestas" and unable judge women with "standards of our own".

Men at the time weren't encouraged to express their feelings and display their emotions openly.  The "stiff upper lip" and "be tough" attitude at that time and men were conscripted to serve in the military during the First World War (and subsequently the Second World War) would have influenced this.  Expressions and displays would have been frowned up and/or censored by those in power in the name of political favour, particularly in Continental Europe, and patriotism. This comedy challenges their invincibility and masculinity and makes clear that men are just as fragile as to woman and this is shown with all of them being involved with Diana.

The cast work really well together and in unison - they are overseen by David Whitworth's Monsieur Maingot who keeps on reminding the group to speak only in French.  There is a continuous dialogue flow taking in account the plot.  There are unexpected twists and occurrences from all the characters' friendships, loyalties and long term secular goals are being severely tested - particularly at a time when they shared that "they may live up to their ideals but not to others".  Paul Miller directs the play and ensures the audience appreciate what the young men then faced.

Audience members who have a good command of French can appreciate the play's wit, irony and colloquialism.  Certainly hilarious throughout with the young men's misunderstandings of the French language and innuendoes attached.

Simon Daw's staging certainly has a continental feel with French writing on the stage's back drops.  It blends well with the story and its moods and Mark Doubleday's lighting compliments the staging.  A comedy which will give an audience to ponder as much as being farcically entertained.