All Things Considered Theatre's Dr TV and the TV Zombies

Commissioned and written specially for Leeds City Council's Public Health by David Coggins Dr TV and the TV Zombies was presented by All Things Considered Theatre at the West Yorkshire Playhouse. 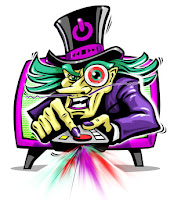 Wakefield College's musical theatre students performed this production.  It is about Dr TV wanting Bored Town, a fictitious place, to watch more and more television.  Zombifying the residents he can plan his world domination and he begins his quest by building the town's new  television factory.  Fortunately not everybody is under the spell of Dr TV.  A small group of people including the Knitting Circle and The Book That Knows Everything plans to save the town and bring about change.

An excellent production overall performed by a very talented cast.  The catchy songs, specially Too much TV's bad for you, and music arranged thoughtfully by Paul Dale Vickers. Great colourful and eye catching staging and costumes compliments the show.

The production's aim is to encourage children and families to see the negative impact of excessive television viewing and pursue physical activity. Geared at school children where they have an opportunity to sign a Dr Swapathon pledge to swap some TV viewing for exercise.  Not just for children, adults especially parents too can participate either with their children or on their own.  Certainly something for everyone!

The resources for this production is available for schools to use including putting on their own performances.  Further information can be found here.

A big thank you to both All Things Considered Theatre and Leeds City Council's Public Health for putting on a successful production!  One is sure that many will benefit from the positive legacy of Dr TV and the TV Zombies.
Posted by Dawn Smallwood at 08:17