All Aboard for The Railway Children! The Signal Box Theatre, National Railway Museum, York

It is a privilege to see E Nesbit's The Railway Children adapted on stage.  York Theatre Royal and National Railway Museum successfully hosts this award winning production at The Signal Box Theatre, York Theatre Royal's temporary residence during the theatre's restoration.  Written by Mike Kenny and directed by Damian Cruden York Theatre Royal first staged this production back in 2008 and followed by successful runs in London and Toronto. This year it returns to its original home. 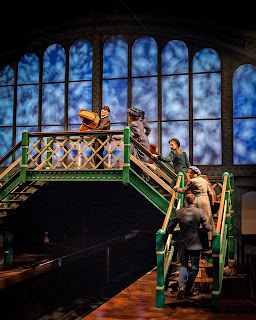 The story echoes the childhood of E. Nesbit and how the characters of Roberta (played by Rozzi Nicholson-Lailey), Peter (played by Izaak Cainer) and Phyllis (played by Beth Lily) embrace the spirit of humanity despite its setbacks including political and social injustices. The children have the help of the community and the kind hearted Old Gentleman (played by Michael Lambourne, who steps in at the last minute for Berwick Kaler) to achieve this. The cast replicates this spirit by their enthusiasm and energy with their excellent portrayals of the characters.  All aboard with their interaction with the audience! 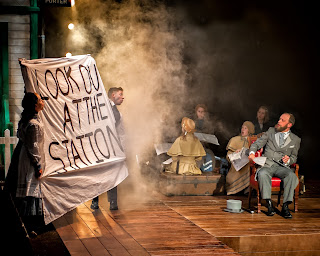 The story is narrated from the children themselves and how they support one another and their family with the station being centre stage.  Joanne Scotcher's great staging with the track running through the theatre ensures the audience is part of the Yorkshire Community.  The staging is in spirit of the time when the story was written.  It could not get any better than the use of the locomotive used from the 1970 film.  A great combination of lighting, music and soundscapes used, courtesy of Richard G Jones, Christopher Madin and Craig Vear. 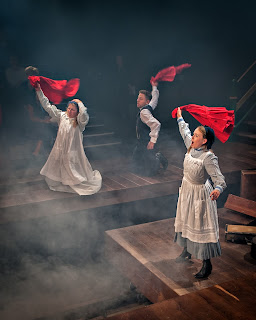 Certainly an unmissable production with something for everyone! Perfect for families and railway enthusiasts! It's on during the school holidays until 5th September 2015. 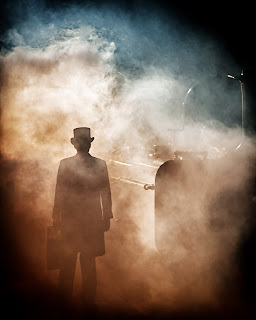