I joined a Theatreland walking tour which The Society of London Theatre organises  monthly and Diane Burstein, a registered London Blue Badge Guide, lead these tours.

We all met at The Old Vic in Waterloo.  It was known as the Royal Coroborough Theatre.  Drama is the main forte offered at the theatre and Shakespeare ‘s Richard III is currently playing there.  The play starring Kevin Spacey and directed by Sam Mendes.  The Theatre was renamed after Queen Victoria and the theatre was shaped by Lilian Bayliss’s influence throughout the 20th Century.

We then visited National Theatre Studio which was originally erected for the The Old Vic.  Across the road we saw The Young Vic Theatre the site was originally a terrace of shops until the bombing of World War II where a considerable number of people were killed.  The theatre was found in 1940 by George Peline and the theatre became separate from The Old Vic.  The old entrance of the original shop is retained and was originally a butcher’s shop.  Plays that are shown there are known as Off West End and attract well established actors.

Across from the Young Vic Theatre is The Bookshop Theatre where a number of theatrical events are held and these are considered as Fringe and there are a number of venues that are unique that hold Fringe events.
Via a local residential area which has yellow brick houses and were originally built for the workers in the early 20th Century.  Some of the streets such as Windmill Walk and Raipell Street survived during World War II and the houses on those street are around 1m GBP!

Somerset House via Waterloo Bridge.  This building was built in 1777 for the Navy.  The site once belonged to Earl of Somerset (Palace) who had a direct involvement with theatre during the 17th Century and engaged playwriters such as Inigo Jones and Ben Johnson.  The Palace was eventually demolished and Somerset House was built.  Somerset is nowadays a ‘palace’ for the arts and houses Courtauld Art Gallery and the art library.  In the summer cinema, stage and music events are hosted and in winter there is a skating rink.

Lyceum Theatre was owned by Henry Irvin, an acting Manager in the 19th Century and ceased running as a theatre in 1936  In the 1980s it was a dance venue and in 1996 Apollo Leisure purchased the theatre and refurbished it.  It revived a couple of musicals before Lion King opened in 1999 and still is running.  Around the block we saw the site of the former Gaiety Theatre which reigned from 1903 to 1936.  It was known for its Gaiety Girls and Stage Door Jollities.

Novello Theatre , formerly called The Strand, was known as the Waldorf Theatre in 1905.  Ivan Novello, formerly Davies, lived in a flat above the theatre.  In 1929 the theatre hosted the shortest running production of one night!  The guide discussed that censorship has been abolished in 1969 and the following year Oh, Calcutta came to the theatre.  At present the theatre is hosting Betty Blue Eyes.

Finally we stopped at Theatre Royal Drury Lane where King Charles II’s Coat of Arms is displayed circa 1663. King Charles II loved his theatre and liked the idea of spectacular.  A pub across from the theatre is called Nell of Drury Pub and Nell Gwyn was the King’s mistress.  At the front of the theatre there is a Fountain named after Augustus Harrison where in 1890 he put hydraulic system into the running of the theatre but it is not used nowadays.

There is where the tour concluded and I thoroughly enjoyed knowing more about London’s Theatreland – Simply the best in the world! 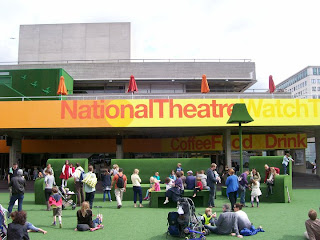